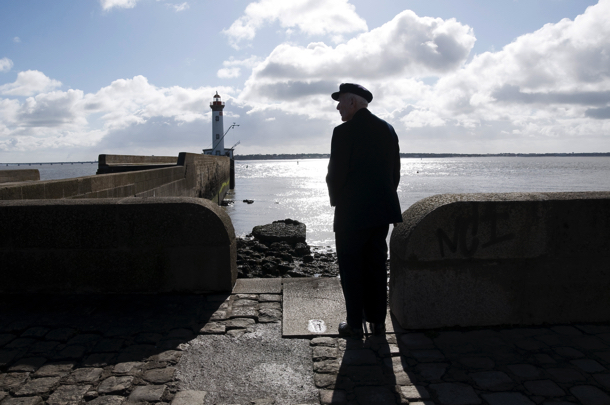 Truth is stranger than fiction and certainly so in the case of Michael (Micky) Burn a man whose life was full of  serendipity. Olliver’s doc is based on Micky’s autobiography Turned Towards the Sun (now sadly out of print) that records a lifetime of experiences that are individually remarkable but, as a collective memoir, make for a fascinating few hours of viewing.

Micky lived for almost a century (1912-2010) during which he met Hitler, slept with Guy Burgess and Audrey Hepburn’s mother, became friends with the Mitford sisters, travelled with the King and Queen while writing for The Times, won the Military Cross for his part in a WWII raid on St Nazaire, broadcast a radio programme from Colditz Castle (while a prisoner of War) and attended a Nuremberg Rally before marrying the woman of his dreams, after selecting her from a photograph.

On a prosaic note, we first glimpse our hero being fitted with a hearing-aid in hospital. What emerges from this encounter is an amusing, quite voluble chap in his 90s, and we want to know more. What follows is a look round his elegant home in the magnificent Welsh countryside where he is planning (with Olliver) a trip to St Nazaire to re-visit his wartime derring-do. Despite his illustrious past and educated background, Micky is far from the pompous ‘War Hero’ you might imagine. Charming and down-to-earth with a ready wit and surprising vulnerability, he may have been a soldier but his courage came from being a gentle and decent man. Describing himself as an ‘Amateur’ in the true sense of the word, he puts his longevity down to “always being in love” – not just with a person, but with a life pursued with passionate engagement. He does consider himself a professional though, when it comes to his poetry because, in his own words, he did ‘the best he could’.

The re-enactement of the trip to St Nazaire takes the documentary out and about, meeting fellow war comrades – one is called “Tiger”. Clearly there is a great fondness between them all and Micky converses both in French and later in German during his trip to Colditz – during which he openly voices his disgust of the place, as he re-lives the past and his Radio broadcasts from a room high in the attic. There is an emotional reunion with the Duchess of Devonshire during which the couple chat light-heartedlly about their wartime meetings with Nazis, that seemed innocuous as the time, as were seen to be a patriot bunch doing a good job getting Germany off its knees. The pair collect eggs together in the grounds of the estate, and share a joke or two. Burn frequently mentions his wife, Mary Booker, whom he adored passionately, but who he never fancied sexually – much to his great regret – because the two were, quite clearly, happily married and devoted to one another for over twenty years until her death. In memory of his love for her, he actually wrote a book about her previous love affair with a pilot who was killed during the War. Burn is very candid about his bi-sexuality and sex in general – in the way that old people often are – having little to lose with these revelations now that the mystery of sex and love are finally over.

Whilst being a worthy and engaging tribute to an extraordinary man, the only criticism of Olliver’s doc is its rather structureless, fractured narrative which tumbles out like a stream of consciousness from this fascinating, sometimes eccentric and clearly still emotionally perplexed man who was full of love and strong feelings for life and the people he met on the way. The final moments are moving as his reads his poem: ‘Thine’. MT