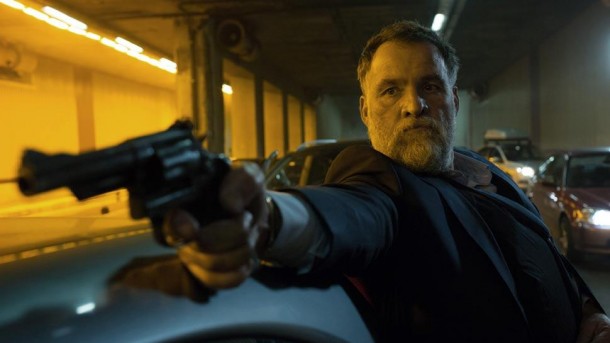 The first feature by a notorious 1990s ex-gangster turned director ABOVE THE LAW (Tueurs) is a high-octane, on the boil Belgian crime thriller that follows a hard-edged armed gangster who, in predictable style, has just completed his final heist. As the ideal suspects, Valken and his gang find themselves caught up in a criminal case dating from thirty years earlier. It looks as if the outlaws are back.

The chilling opening scenes remind us of the notorious ‘Brabant Killers’ who remained at large evading the authorities; archive footage showing how they gunned down 28 innocent bystanders in a series of town centre raids in the early 1980s. This glossy noir then takes shape 30 years later with another crime involving an explosion in the underground carpark in contemporary Brussels, where all witnesses are subsequently eliminated including the investigating inspector Veronique Perotte (Natacha Régnier). The narrative then flips back to the weeks preceding the murders where Olivier Gourmet’s Frank Valken and his gang prepare for the heist.

But the police and security forces have finally got their act together, headed by Bouli Lanners’ Dany Bouvy and astute detective Lucie Tesla (Lubna Azbal). As crime thrillers go, this is run of mill stuff but terrifically well-crafted and expertly performed in its slick Belgian settings that showcase the city’s underbelly and aerial views rather than it’s more refined venues. Clément Dumoulin’s throbbing occasional score keeps the action turning over in the breathless action sequences. MT