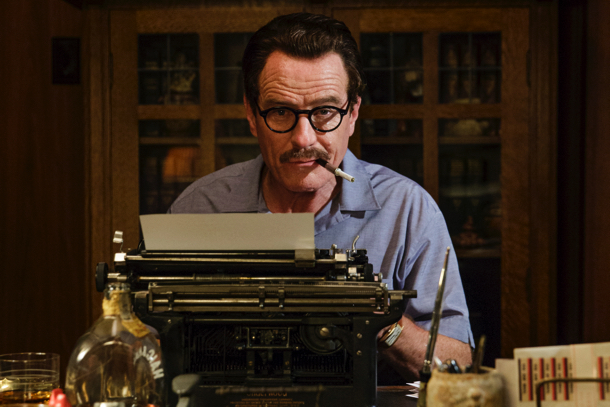 Jay Roach (Game Change) has filmed the battle of Hollywood script writer legend Dalton Trumbo (1905-1976) against the fanatical witch hunt of the ‘House of Un-American Activities Committee’ (HUAC), which cost him and other members of the filmmaking fraternity their jobs, and, together with other victims in the teaching professions, civil service and the military, in many cases their lives.

Roach tries not to portray Trumbo (Bryan Cranston) as a martyr – which seems about right, after all, he got his career (and his two Oscars) back; his family, thanks to his wife Cleo Beth Fincher, stayed together – but many victims of Senator McCarthy’s anti-communist crusade were not so lucky.

We meet Trumbo in the mid forties at his ranch house north of LA, ostentatiously living the good life with his wife and three children – he was after all one of the best scriptwriters in Hollywood, earning close to a million dollars a year. This lifestyle did not collide with his political beliefs, he was a member of the Communist Party of the USA between 1943 and 1949; like many of his fellow intellectuals he was drawn to communism, since the pre-war USA government supported the fascist regimes in Hungary and Spain, whilst turning a blind eye to the “German American Bund”, a Nazi organisation in the USA, supported among others by Walt Disney. Trumbo became one of the “Hollywood Ten”, who did not reveal names in front of the ‘HUAC’ hearings in 1947, and served eleven months in prison in 1950 for “contempt of Congress”. (In the correctional facility in Ashland, Kentucky, he met Parnell Thomas, one of the members of the HUAC committee, who served time for fraud embezzlement).

After his release, Trumbo had to sell his house, since he was blacklisted with countless others. He moved with his family to Mexico; on his return to LA in 1954 his neighbours made him feel very unwelcome, throwing garbage into his pool. By then Trumbo had not only re-started his scriptwriting career, using the names of others as front, but had also helped fellow victims to do the same. Sure, their salaries were meagre, but they still did good work: Trumbo was responsible for the cult classic Gun Crazy (1950) produced by Frank King (John Goodman), who swings his baseball at an agent, who wants him to stop Trumbo and others writing for him. Trumbo himself worked like possessed, and his family life suffered enormously – he would not even attend the birthday celebrations for his daughter Nikola (Fanning). His wife Cleo (Lane) had to put up with a rather dictatorial husband, who took to alcohol and Benzedrine.

Trumbo, whose scripts for Roman Holiday (1953) and The Brave One (1956) had won Oscars (which were collected by front writers), tried to fight the blacklist with others but one of his main foes was the gossip columnist Hedda Hopper (Mirren), a vicious anti-Semitic campaigner, who blackmailed the, mainly-Jewish, bosses into keeping the blacklist alive. Only in 1960, Otto Preminger (Exodus) and Kirk Douglas (the co-producer of Spartacus) finally killed the blacklist, supported among others by the powerful “American Legion”: Trumbo’s name was on the credits for both films; a year later President Kennedy walked through the picket lines of “American Legion” supporters, to watch Spartacus. In 1993, Dalton Trumbo received the Oscar for The Brave One in person, his wife Cleo collected the one her late husband won for Roman Holiday in 2011.

Roach’s TRUMBO is often funny, particularly in the middle part when he is writing with other blacklisted writers in a factory style process, to make ends meet. Mirren is fantastic as a vicious Hopper, her over the top performance, again, draws some laughs so does David James Elliot’s John Wayne who, attacking Trumbo, is reminded by him that he spent the war on beaches filming, shooting just blanks. But the fate of Arlen Hird (Louis C.K.), who suffered many years whilst fighting lung cancer through the 50s, is portrayed with great sensibility. Overall, a populist approach (which still is informative) to Trumbo and the ‘Blacklist’, is an clever option, because it will attract a new and younger audiences who might not be drawn primarily by the story, but the stars of the film. This way, they will learn about a very important chapter in film history. And that is worth a few slapstick moments – purists will anyhow have seen the 2007 documentary TRUMBO. AS