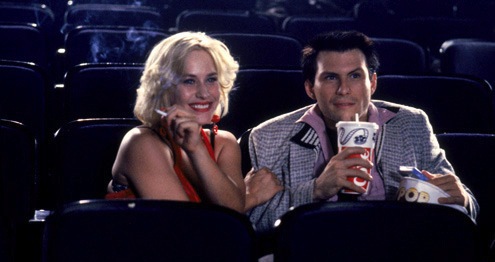 TRUE ROMANCE is certainly the best Quentin Tarintino film ever. Yes, Tony Scott is the nominal director, but apart from changing a sober ending into a happy one, he made really no significant contributions to Tarantino’s script – how could the maker of bombastic, simplistic films like Top Gun and Beverly Hills Cop II, come up with a lyrical parable, told in the style of a fairy story but shot in the style of a cartoon?

Talking of cartoons, TRUE ROMANCE hero Clarence (Slater) works in a shop selling them – just like Tarantino worked in a video rental shop before his film career took off. Clarence is in love with martial arts movies and Elvis (the latter, played by Val Kilmer, often turns up to reassure Clarence that all will end will). Clarence’ idea of a birthday treat is a Martial Arts treble bill at his local cinema. There he meets Alabama (Arquette), a call-girl, as she insists, but only for four days, equalling four customers. Clarence’ boss has hired her, to give his employee a treat. The two naïve dreamer fall in love, and Clarence kills Alabama’s vicious pimp (Oldman, in leotards), but mistake the suitcase with drugs worth 5M$ for the one with his sweat heart’s (in true fashion they get married a day after meeting) belongings. As a good son, Clarence introduces his wife to his ex-cop father Clifford (Hopper), before the couple sets off to LA to make their fortune. Clifford will pay for this visit with a grisly death at the hands of Vicenzo Cocotti, Christopher Walken at his psychotic best.

In Los Angeles (=Hollywood), we get so many stand-out performance, that a few will have to do: like James Gandolfini’s vicious killer Virgil, beaten to pulp by his intended victim Alabama, Brad Pitt’s lodger, who is always so high, that he gives away the couple’ hideout to all visitors asking for them, and they are many, as the bloody mass-shootout in the end proofs. In Tarantino’s version, Clarence is one of the victims, but Scott “fell so much in love with the two main characters”, that he lets the hero survive, closing the film five years later at a beach in Mexico, where the couple frolics with their son Elvis. Tarantino later gave his blessing to Scott’s version, and few will disagree.

Apart from DOP Jeffrey L. Kimball’s (Windtalkers) candy-coloured images, Hans Zimmer’s main theme – based on Orff’s ‘Gassenhauer’ – is most memorable, a haunting, torturous tune, just right for this grim, violent tale, very much an adult variation of Alice in Wonderland. AS