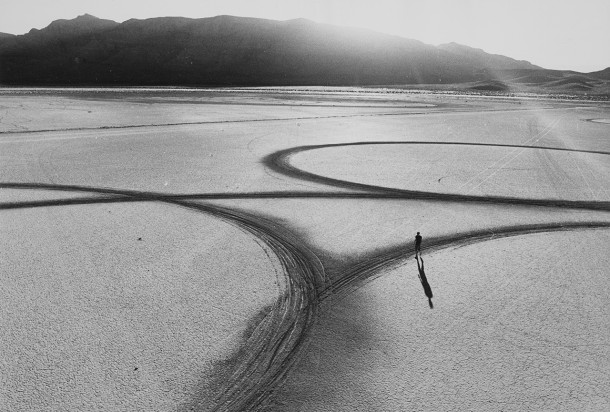 Best known for his 2007 documentary Black White & Gray, about the relationship between photographer Robert Maplethorpe and Sam Wagastaff, Robert Crump here turns his camera on a group of artists who create Land Art, a movement which grew out of the rejection of gallery culture in late 1960s Los Angeles.

This was a time dominated by the Vietnam War in the US and questions about the identity of the country were asked and artists, always at the forefront of change, asked for radical solutions: not only for politics, but also their own creative output. A group called the s Angeles, led by Michael Heizer (*1944), Robert Smithson (1938-1973), Walter de Maria (1935-2013), Nancy Holt (1938-2014) and Charles Ross (*1937) decided to end “the dictatorship of the gallery owners”, and move out of LA into the desert in order to find space for their Land Art, a technique 3000 years older than oil painting, with images not unlike those found in Stonehenge.

Ironically, one of the gallery owners, Virginia Dwan, the heiress of the 3M Group, helped the artists at the start, as did the Avalanche Magazine, the semi-official magazine of the movement. The enormity and scale of the artwork created can only be imagined when we discover that 240 000tons of rock in the Nevada desert had to be moved to provide an adequate canveas for Michael Heizer’s Double Negative (1969/70) which involved the digging of two enormous trenches 50 feet deep and 30 feet wide into the rock, for an entire installation spawning 1500 feet.

In 1969 Heizer had to abandon work on the rock installation ‘Levitated Mass’, because the equipment to transport the installation to the LA County Museum of Art could not be found. But he realised the project in 2012, transporting the 340 tons art work from the Stone Valley in California to the Museum, which took eleven nights. Ever since 1990 Heizer has been working on his project City, a huge complex in Lincoln County, Nevada.
Robert Smithson, the tragic hero of the movement, who died in a plane crash in Texas whilst researching his new project at the Amarillo Ramp, created the giant earthwork ‘Spiral Jetty’ in 1970 at the Salt Lake, Utah, measuring 4572 m by 457 m. His wife Nancy Holt, the only woman of the group, had spent most of her time as a peacemaker between the male artists who often had more energy for confrontation than for their art.

In 1978 she filmed the creation of ‘Sun Tunnels’ in the Great Basin Desert of Utah. The installation consists of four massive, 18 feet long tubes, placed in a radius of 26m. There are holes in the tubes, which are aligned to the star signs of Draco, Perseus, Columba and Capricorn. The configuration creates amazing play of light images. Walter de Maria’s Lightning Fields (1977) in New Mexico consists of 400 stainless steel posts, which lighten up during thunderstorms, and change optical effects, due to changes in time and the weather. The rectangular grid’s dimension is 1 mile by one mile. Charles Ross’ began working on he prism sculptures of ‘Star Axis’ in 1971 which places its viewers parallel to the axis of the earth, when walkimg alomg the imstallation. ‘The Star Tunnel’  is the centre of Star Axis, comprising a stairway, ten stories high, to a naked eye observatory, enabling an ever increasing view of the sky.

It goes without saying that these artists were idiosyncratic. While Heizer is a throwback to the American pioneer, who conquered the West, de Maria was a much more gentle and poetic creature. Crump avoids a hagiographic approach, but he manages to convey the utter originality of the artists. TROUBLEMAKERS is a film to be watched: the images of DOP’s Robert O’Haire and Alexandre Themistocleus, as well as the films by Heizer and Holt about their work process, are absolutely out of this world. Together with the documents from the late ’60s showing how the artists gradually left the bars of LA for the wide-open spaces of the deserts, TROUBLEMAKERS is a unique visual journey. AS