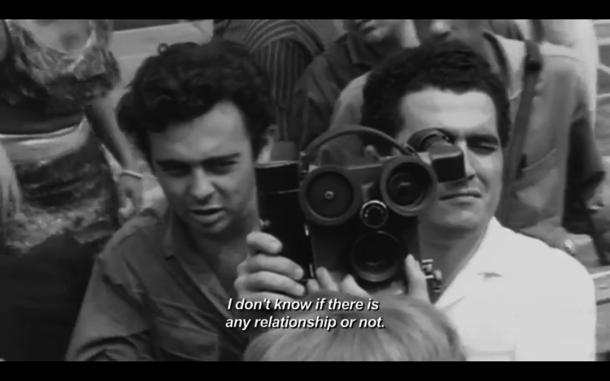 When done right, music and film will forever make perfect bedfellows. Concerning Brazil, 1967-1969, but a music documentary about far more than just another band or style, here the music was a vehicle for something much bigger.

‘Tropicália’ was the name attributed to a Liberalist artistic movement that came into being in 1967, in reaction to the dictatorship that came into force in 1964. Encompassing not only music but poetry theatre and film, it was a movement created by the young, fusing together traditional Folk with Rock and Roll, Pop, foreign influences and the avant-garde. It hit the choked populace of martial Brazil like a blast of oxygen. It spoke of freedom; freedom of thought and freedom of expression which to a Brazilian in the late Sixties was either stunningly, bravely, liberatingly beautiful, or a ridiculously dangerous arrestable offence.

Without knowing a great deal of the circumstances prevailing in Brazil at the time, either politically or indeed, musically, some viewers may not grasp the full import of what it is they are watching.  It’s difficult in this day and age to comprehend the notion of a song capable of changing the course of history, or influencing an entire country. What Rodriguez managed in total ignorance in Apartheid South Africa, Caetano et al did with full cognizance in Brazil.

This film chooses to concentrate more on the music aspect of the movement, rather than the theatre and poetry, although there is some film. It follows the stories of the main protagonists of the music and how their influence spread extraordinarily quickly and widely through the nascent medium of television; it’s wonderful that so much original footage, both tape and film, still exists of the singers back when it was all going down.

Filmmaker Machado has also gone to great lengths to make what few grainy black and white still photographs survive of some of the events of the time interesting using various tricks, but this is more than compensated for by the amazing music from the likes of Os Mutantes and Caetano Veloso.

Tropicália explores what the movement was and what the music signified to the people of Brazil, culminating in an album of the films title, employing all the singers and songwriters of the day creating what was effectively, a political manifesto in song. How Rock n Roll is that? Dynamite.

TROPICALIA IS ON GENERAL RELEASE FROM FRIDAY 5TH JULY AT CURZON SOHO PLUS PANEL DISCUSSION AND RICH MIX ON SUNDAY, 7TH JULY 2013