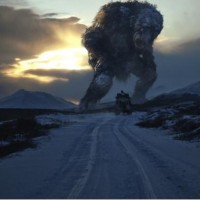 Three student documentary filmmakers decide to go and cover the death of a man purportedly attacked by a bear and get much more than they bargained for.

Director Writer Øvredal has pulled off something rather lovely here. Dressed up in the wolfs clothes of the Horror genre, this is in fact a wickedly observed mockumentary about Scandinavian trolls. Styled rather in the vein of Cloverfield, it playfully ties tales from a Norwegian childhood together with some really impressive low budget CGI -and a healthy dose of shaggy dog story.

For those of you that had a deprived childhood, absent of the abject terror that is the Troll, they were fabled to live in the hills, under bridges and in caves, coming out only at night to feed upon the unwary- be they goat, sheep or errant child… but most particularly, Christians.

When filmed, Scandinavia seldom if ever fails to be anything less than epic and here proves no different. Norway has never looked so beautiful and here lends its raw, vasty nature to the mystery and foreboding in Øvredal’s tongue in cheek conceit.

Much of the actors dialogue was improvised and indeed, improvised well, so there’s a frisson of spontaneity to the reactions and their inter-relationships that gives an added sense of authenticity to this fiction. One cannot help but smile wryly as one watches, both at the central idea and at how Øvredal has pulled it off.

Granted, there are some plot holes, but they are more than made up for with what the rest of the film has to offer. The acting is indeed very good, particularly Hans (Otto Jespersen) and the seriously atmospheric cinematography by Hallvard Bræin.

A great deal of thought and effort has gone into the design and creation of the different troll characters and, with the (giant) steps it seems now being made in CGI almost daily, what might just five years ago have cost a Norwegian King’s ransom, is now proving achievable by a cunning producer, to the benefit of everyone.

So long as you don’t take either yourself or the film too seriously and allow it just to unfold- as you would a yarn in a warm pub when it’s sub-zero outside, then there’s nothing here you will fail to enjoy.
AT