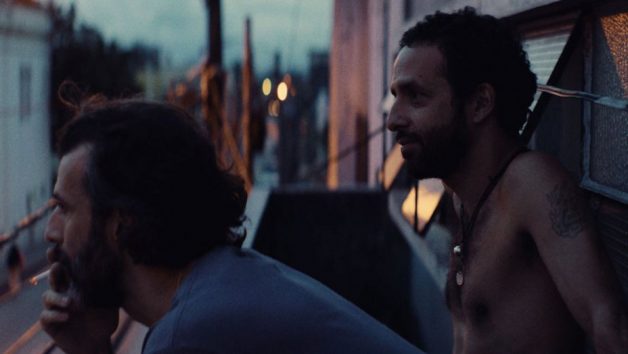 The wrath of God comes down on a Guatemalan financier who tries to leave his wife in Jayro Bustamente’s gloweringly oppressive sophomore feature. There is a definite touch of Garcia Lorca to this fraught affair that sees Juan Pablo Olyslager as the good-looking husband to Isa (Diane Bathen) and father of two in a prominent Evangelical family where the matriarch still rules the roost with fire and brimstone. Not quite as enjoyable at the Guatemalan director’s first feature Ixcanul (2015) this will certainly be popular with the LGBT+ crowd and arthouse audiences who have tuned in to the creative wealth coming out of South and Latin America at the moment.

Guatemala City looks strange and exotic in the brooding widescreen images of cinematographer Luis Armando Arteaga, who also lensed Ixcanul. And to complete the atmosphere Julien Cloquet has devised a haunting soundscape that compliments the tremors of the film’s title. It appears to be the rainy season adding to the gloom of this sombre story with its emphasis on machismo and the importance of holding onto your man – if you’re a woman, that is. But also if you’re a gay man. The LGBT+ community are really having a tough time of it in the bars and spas where Pablo (Olyslager) runs into tousled haired loose-limbed Francisco (Mauricio Armas Zebadua), who inhabits these haunts with an air of world-weary nonchalance knowing full well the competitiveness of his game.

Meanwhile behind the tight security of Pablo’s upmarket family citadel a battle rages to get him to see sense and realise the shame he is bringing on the family, particularly his parents, with a scandalous revelation that comes to light in the opening scenes. So serious is the situation that Pablo is also forced to resign his post amid accusations of paedophilia, leaving him a rather sorry figure as he hangs around the spa where Francisco offers neck massage.

His wife is being supported by the family housekeeper (Maria Telon) as she goes about her day trying to gain comfort from her girlfriends who urge her to focus on getting Pablo back, at any cost. This is further emphasised by the overt community prayers at the family’s Evangelical Christian church where the pastor (Rui Frati) and his brisk sidekick  (Sabrina de la Hoz) exhort the congregation into loud praying. There are some flaws in a script that focuses on the atmosphere of dread and wrong-doing rather than the exact nature of Pablo’s wrongdoing and why he agrees to submit to the church’s “conversion therapy programme” – a highly contemporary sounding measure in the traditional and devoutly Catholic country. As a result it all becomes rather telenovela-ish and histrionic. What does emerge from this striking feature though is the vehemence of the community against sexual deviation of any kind. MT