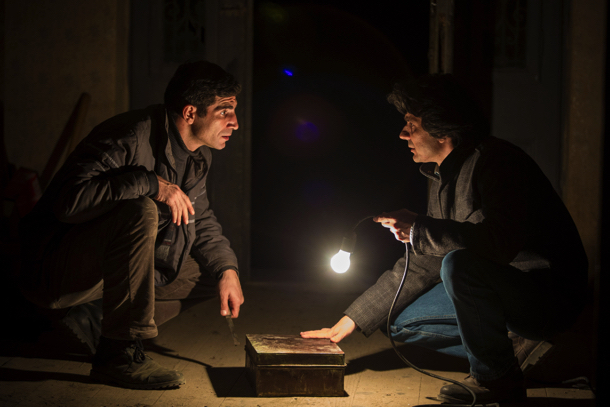 THE TREASURE is Corneliu Porumbiou’s follow-up to meta cinema title When Evening Falls on Bucharest or Metabolism and the second Romanian feature in the Un Certain Regard section at Cannes this year. The neighbourly camaraderie of his lead characters contrasts strongly with Radu Muntean’s urban denizens of One Floor Below was share a savage mistrust for each other that borders on animosity. CAMOARA is a simple upbeat parable which explores post communist society in Teleoman County to the West of Bucharest near the Polish border. Simply framed in medium to long shots, this new wave meta film wears its heart on its sleeve and the usual dark and deadpan Romania humour runs through its feelgood narrative.

When Costi’s neighbour Lica comes round to ask him for a loan of 800 euros, you imagine that he’ll be shown the door. But Costi is not unsympathetic when he hears about the family fortune that is apparently buried under his mother’s country home and discusses the proposition seriously with his wife, when Lica offers a 50 percent share of the hidden treasure in return for some upfront cash. Raising the money through his own family, Costi then sets off with Lica, having also secured the services of a metal detector – which requires another lump of his savings. Armed with the digging equipment the trio then set off to is mother’s property to dig for this improbably crock of gold. Phrases such as ‘a fool and his money constantly’ spring to mind while watch in disbelief, not only at Costi’s gullible naivety but also at the total trust these neighbours place in each other. This is a delightfully heartwarming tale and our scepticism and judgemental attitude about the outcome of the story speaks volumes about the state of our own society and the people we’ve become. An arthouse gem. MT

THE TREASURE IS SCREENING AT SARAJEVO FILM FESTIVAL | 14 – 22 August