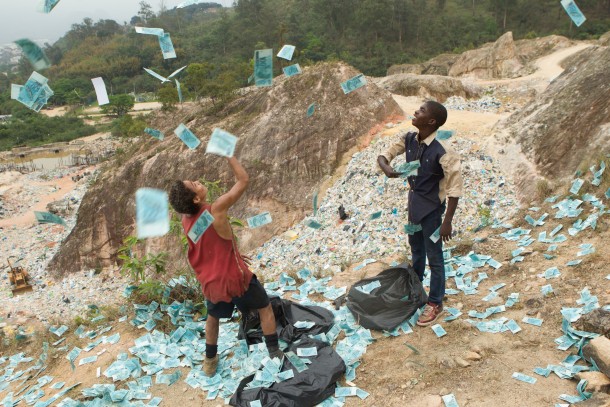 Stephen Daldry made a speculative trip to Brazil with a small film crew. Heading for Rio’s famous favelas, he came across a group of local kids living off the landfill sites. TRASH is their astonishing story.

After a sizzling chase sequence where a man chucks his wallet out of his window onto a skip before being captured and fatally beaten by the Police, we meet 14-year-old Raphael Fernandez (newcomer Rickson Tevez) who finds the wallet while foraging. It contains a wad of cash, a photo of a little girl and a locker key. Delighted, at such a scoop he hides the wallet when Police arrive next morning announcing a reward for its retrieval. Along with his best friend Gardo and a sewer boy called Rato, Raphael sets off to find the mystery behind the wallet’s contents and a set of figures written on the photo – are they lottery numbers or a secret code?  Solving the riddle turns into a dangerous fight for survival as the boys discover the Police are prepared to kill them unless they give up the wallet and a ledger containing information about corrupt Government officials. Martin Sheen and Rooney Mara provide ballast as a couple of unconvincing local do-gooders (a Catholic priest and an aide-worker) who only serve to secure financing and distribution for this entertaining chase movie, which apparently works as comedy to Brazilian audiences – speaking volumes from a social point of view!

There are some similarities here with Slumdog Millionnaire and Ciudad de Dios but the best thing about Daldry’s well-made movie is the genuine appeal of the local boys – all untrained newcomers who can barely read or write in their native tongues let alone speak English. But Daldry has mastered the art of working with children, as we saw in Billy Elliott and although TRASH is a less-convincing outing, it nevertheless amuses with a fearsome pace for most of its run-time – although at nearly two hours, it occasionally feels as sprawling as the endless favelas themselves. The script is in the safe hands of Richard Curtis (Love, Actually) and loosely-based on Andy Mulligan 2010 novel.

Rickson Tevez (Raphael) is screen dynamite as the ‘heart of gold’ hero who triumphs through inventiveness and perseverance delivering a message of hope and serving as a fabulous role model for young kids of today. The other standout is Gabriel Weinstein, who plays the ‘sewer boy’ with charm and considerable aplomb. Selton Mello, the detective leading the chase, is consistently sinister while also portraying the modern face of the Brazilian middle class and there’s also a deftly-placed cameo from Christiane Amanpour to keep the whole thing tethered in the reality of this real human interest story which, despite its tragic backstory, ends on a positive note. MT