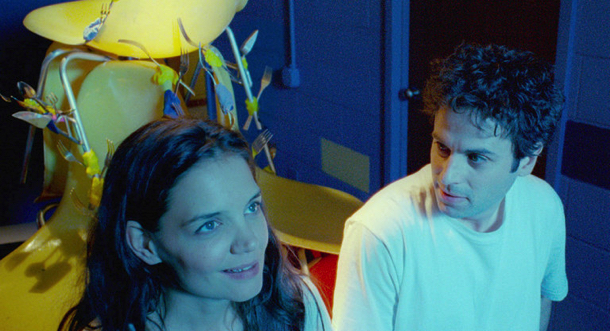 Paul Dalio’s exploration of a semi-autobiographical love story between two bipolar poets, whose toxic relationship ignites and stokes up their manic tendencies when they meet as patients in a mental home, is certainly touched with melodrama and histrionics. In Touched with Fire, inspired by a book by psychologist author, Kay Jamison, who also appears as herself to endorse its contents, Carla (Katie Holmes) and Marco (Luke Kirby) fail to engage our sympathies or capture our imagination as lovers who continue their relationship in the outside world, under the watchful eyes of their respective parents. Having exposed their worthwhile story Dalio’s greatest flaw is in failing to probe deeper into this challenging theme or contextualise his narrative for wider audiences than those affected by its subject matter. Given its limitations, Touched with Fire is a reasonable human drama but don’t expect much from Holmes and Kirby. In more experienced hands this could make a fascinating feature. MT