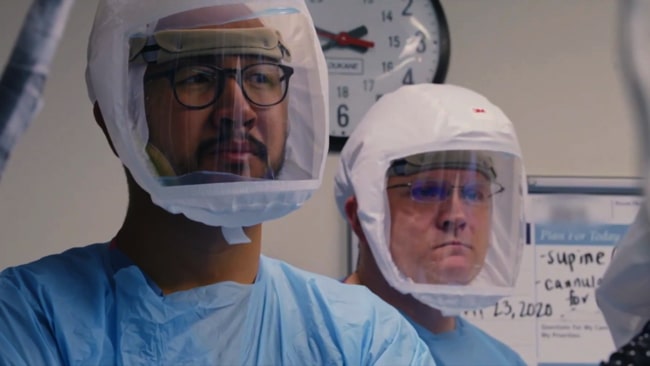 Prolific documentarian Alex Gibney and his co-directors Ophelia Harutyunyan and Suzanne Hillinger got together with a bunch of scientists and US government politicians to try to work out how the Covid19 pandemic wreaked so much havoc in the US, with over 8 million infections, at the time of writing.

Back in January before the world was engulfed by the virus US President Trump was heard to say “Its just one person coming in from China”. By the end of that month Alex Azar, Secretary of State for Health and Human services claimed: “the national testing programme is up and running”. But it was not.

Trump refused to believe the scientists and called the CDC (Centres for Disease and Prevention) a “Deep State” site attempt to undermine his re-election chances. Its director, Robert Redfield had a history during the Aids crisis, calling for abstention and a strictly religious approach to the pandemic. Eva Lee director of the Centre for Operations Research in Medicine and Health Care at the Georgia Institute of Technology, developed a programme called Real-Opt using algorithms to predict the course of the pandemic. Meanwhile in South Korea testing was already well under way resulting in only 300 casualties from the pandemic. Asian countries were accustomed to using masks, and non compliance meant heavy fines. The American approach saw the refusal to wear a mask as a patriotic duty. The death rate soared, the USA representing 20% of global victims on this planet, in a total citizenship of just 4.23 %.

The Trump administration had meanwhile got rid of the Pandemic Crisis Group set up by Obama. Returning from India at the end of February, Trump insisted the US was in a prime position. At  Stadium packed with 100 000 he wooed the crowd with open arms, and went on calling the pandemic a hoax:”only fourteen cases were known”. Nevertheless, a special Covid unit under the leadership of Vice-President Pence (who had encouraged cruises and visits to Disneyland) was formed. It consisted of Dr. Deborah Birx, a scientist and diplomat. She has stayed the course within the Trump circle, making compromises all the time, whilst Dr. Fauci, Director of the National Institute for Allergies and Infectious Diseases, has clashed with Trump on more than one occasion.

Trump insisted that tests would provided for all US citizens but the reality was very different: it was not just the Test Programme, which was handicapped by the lack of available testing material, PPE equipment and respirators were also short in supply, with fierce competition between the various states to secure specialised equipment after the government had sold millions of masks to China at the beginning of the pandemic. Countless health workers and first responders paid with their lives.

Trump fought hard to avoid a lockdown, but pressed too early for a re-opening: “We are not a country which was built for a lockdown, we do not let the cure be worse than the problem”. Trump replaced civil servants with business men, and fired no fewer than five Inspector-Generals. The president also indulged in “miracle cures” like hydroxychloroquine, an unproven medicine which was promoted by the Rasputin-like figure of Dr. Vladimir Zelenko. After Trump had taken the drug (“A gift from God”), Dr. Birx was asked by reporters to verify this – her answer was “its frustrating, it will rain for three days”. Whistle-blowers like Dr. Nancy Messonier of the CDC, and Max Kennedy (grandson of Robert) helped uncover government secrets such as the too early release of a vaccine in time for the election on November 3rd.

Shot by DoP Ben Bloodwell (and many others) with protective covering between Talking Heads and camera, Totally under Control has nothing particularly new to bring to the party, but chronicles a disaster that cost many their lives. The end is poignant and full of poetic justice: a day after the feature was finished, President Trump caught the virus, but lived to tell the tale. AS