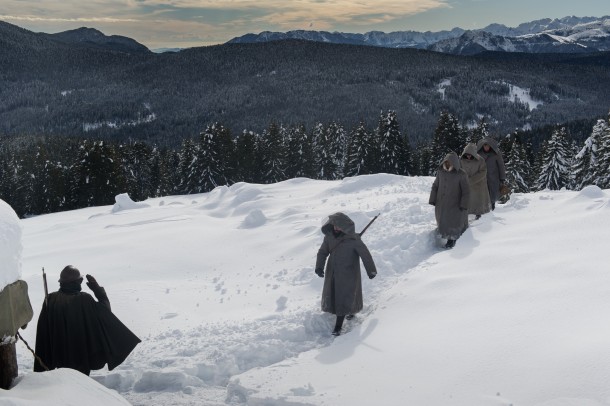 English translations of subtitles and films titles leave a great deal to be desired. Are they all being churned out from a trailer park in deepest Albania by teenagers googling internet translation sites? Not that I have anything against either but the English in the subtitles simply does not do these arthouse and independent films any favours – it does not reflect the tone or content accurately. The English translation of TORNERANNO I PRATI is GREENERY WILL BLOOM AGAIN. Surely MEADOWS WILL BLOOM AGAIN would more evocatively conjure up the hope of Peace and renewed prosperity after the grim hardship of War in this starkly drawn First World War drama by one of Italy’s most talented contemporary filmmakers, Ermanno Olmi.

Shot in a sombre palette of gunmetal and taupe by cinematographer (and son) Fabio Olmi, the anti-War story unfolds in the desolate mountains of North Eastern Italy near the Austrian border, where a winter landscape envelopes a group of exhausted and grimy soldiers, chilled to the bone despite being swaddled by heavy (and sodden) uniforms. Led by a strong performance from Claudio Santamaria as The Major, who arrives with a dispatch that can only lead to tragedy for all concerned in the bunker of death. In the meltdown that follows, soldiers lose their lives and are interred in the heavy snow.

The strength of Olmi’s drama lies in his stark depiction of the miserable drudgery of combat: an uneasy tension builds as the platoon waits in appalling conditions for certain death either from the elements or the enemy. TORNERANNO I PRATI is a gruelling mood piece that fails to match the complex narrative of his previous outings THE PROFESSION OF ARMS or TREE OF WOODEN CLOGS but nonetheless conveys the pity and futility of war. This is war that affects ordinary working men equally – there are no good or bad characters here, just simple farmers or tradesmen forced to fight in a senseless battle where no one is ultimately a winner, Olmi’s tragedy delivers its message simple and soberly.MT

Reviewed at Berlinale 2015 and screening at the CINEMA MADE IN ITALY festival here in March.