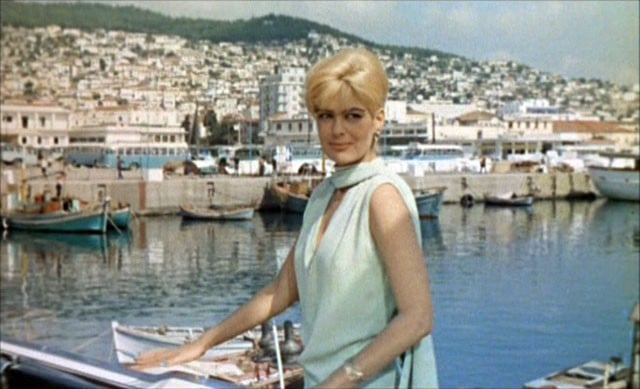 The second of two glossy international adventures Istanbul played host to in 1963 (the first was From Russia with Love), this much-copied (especially the scene with the cat burglar suspended from the skylight) adaptation of Eric Ambler’s 1962 novel The Light of Day’ is the sort of slick entertainment Losey thought he was making – but wasn’t – when he made Modesty Blaise two years later.

Effectively a sumptuous, less clinical Technicolor remake by Jules Dassin of his own classic fifties heist movie Riffifi. Henry Alekan’s photography is as fluidly mobile as it is ravishing to the eye (notably in the scene clambering across the roof of Istanbul’s Topkapi Palace Museum in brilliant sunshine).

With the cast including Peter Ustinov playing a schmoo “who aims low and misses”, Robert Morley and Akim Tamiroff you know you’re not going to get method acting; even without queen bee Melina Mercouri. (Ustinov later opined that director Dassin “could have had a more remarkable career if he had not dedicated himself so devotedly to her service”.) Yet despite the gleaming presence of Ms Mercouri as a voracious nymphomaniac there are occasional scenes with a strong homoerotic character; and not just the one with the oiled-up wrestlers. @Richard Chatten