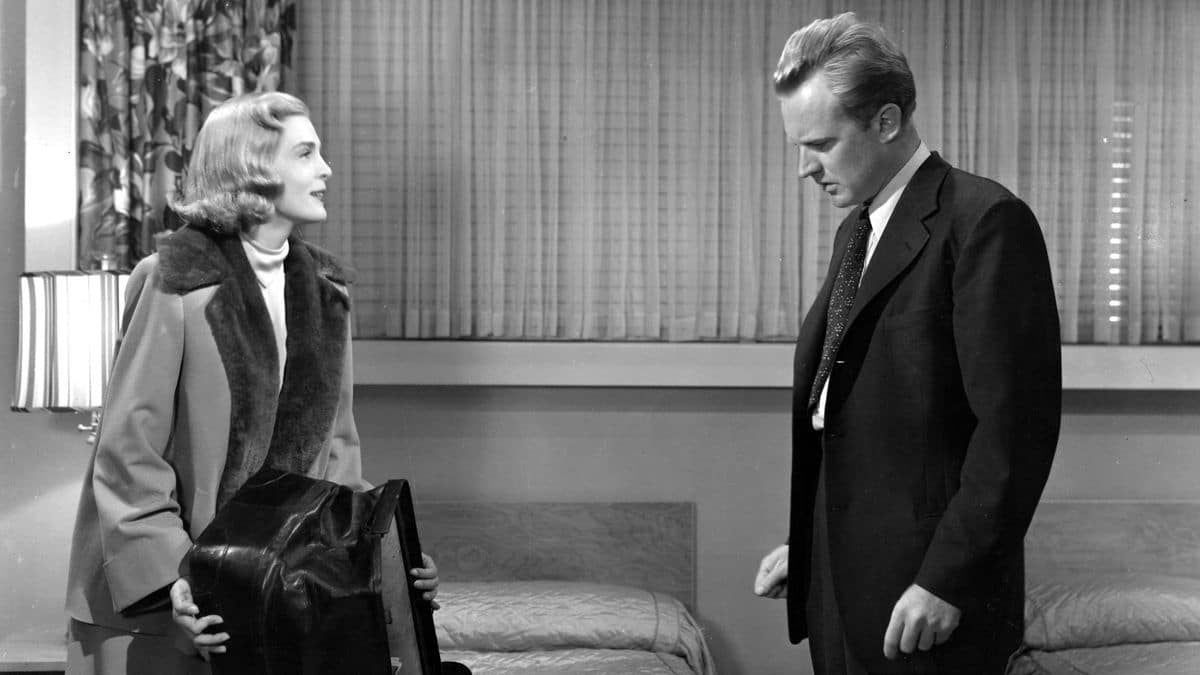 Don’t expect the tear-jerker the title might lead you to anticipate. To paraphrase Godard, all you need for a film noir is Lizabeth Scott with a gun in her handbag, and that’s what you get here.

Visually the film isn’t actually terribly noirish, since much of the action takes place in the modest but well-lit little apartment occupied by honest working stiff Arthur Kennedy and his wannabe Queen Bee wife Lizabeth Scott. However, since Ms. Scott’s extraordinary face framed by a sleek blonde bob is a prominent visual motif throughout the film, there are enough images of her framed by cameraman William Mellor in a succession of chic high-collared suits to inspire plenty of paintings by Richard Hamilton.

In a narrative that anticipates Sam Raimi’s A Simple Plan, Kennedy and Scott have predictably differing ideas about what to do with a suitcase containing $60,000 in untraceable notes that unexpectedly lands on their car seat. Not long afterwards Dan Duryea at his scariest wearing an obnoxious little bow-tie comes calling wanting his money back, before learning too late – like Tony Perkins in ‘Pretty Poison’ – that he’s in way out of his depth with a true criminal sociopath like Ms. Scott.

There’s a lot of talk; but as scripted by Roy Huggins (who later created ‘The Fugitive’ and ‘The Rockford Files’) it’s good talk, and the interaction and development of the characters builds to a most satisfyingly conclusion to which little clues have been discreetly sown along the way. The characters of the man introducing himself as Kennedy’s former war buddy, and Kennedy’s sister herself who lives across the landing – played by Don Defore and Kristine Miller – don’t at first seem terribly interesting but grow to confound expectations.

All the acting is good, with the possible exception of Ms. Scott herself, who’s a bit one-note, but isn’t really required to do much except look like Lizabeth Scott, which she does to perfection. Aged only 26, she already looks as if she’s had her face lifted about half a dozen times; but on her it looks good @RichardChatten