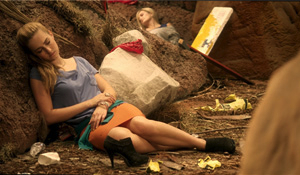 Whilst having an exhibition at the Los Angeles Hammer Museum in 2013, Paris born performance artist Neil Beloufa shot his first feature film in English: TONIGHT AND THE PEOPLE is a send-up featuring cowboys, a sheriff, a salesman, two blackslackers  and some lusty teenage girls, their disparate and desperate actions held together by the iconography of the Red Bandana, which they show off proudly or try to steal from each other. TONIGHT AND THE PEOPLE is a western, a gangster movie and an apocalyptic political road-movie rolled in one. Shot exclusively in a studio, the actors find themselves in everyday conflict situation, to resolve these, they all start talking like politicians – hollow words masking their egoistical targets. Well aware, that the end of the world is near, they nevertheless pursue their very mundane tasks. After a big bang ends it all, the (not so magnificent) Seven wake up as the sole survivors of this planet – immediately following the pattern of their former existence: when asked by an imaginary reporter, what they would do different now, they all waffle on with the empty clichés they used before. Only on man is honest – he wants to be the President of the little community, naked power lust concealed by a winning election campaign smile. Beloufa succeeds in keeping up the interest of the audience without a straight narrative, keeping the episodes just close enough connected, to hold the film together. He shows a world of everyday losers, who talk the talk, but don’t do very much. In showing their non/actions in the guise of many genres, Beloufa connects politics and films as two sides of the same coin: illusion, disguised by words. Anarchic, very much like a contemporary Marx Brothers film.