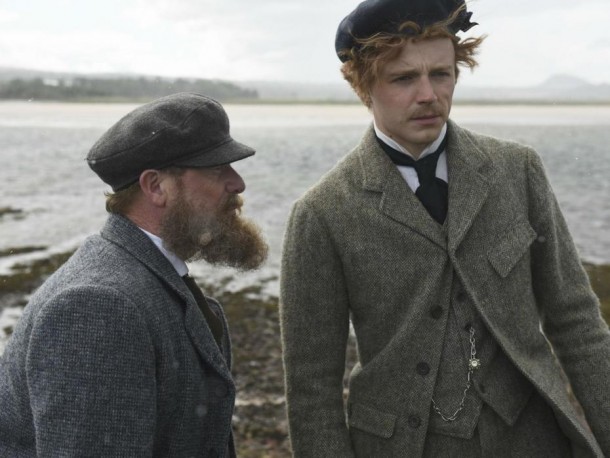 Even if you feel that golf is ‘a good walk spoilt’ – as the saying goes, TOMMYS HONOUR is a surprisingly moving biopic about the game’s Scottish founding father and his champion son (both called Thomas Morris) who was the youngest player to win the Golf Open in 1868, aged just 17, and played here with cocky charm by Jack Lowden.

TOMMY’S HONOUR is the fifth feature of Jason Connery, the son of another famous Scottish legend and Bond, Sean. The film works both as a historical tribute to the popular sport and as a coming of age portrayal of rebellious youth versus experience that plays out through the feisty relationship between the quietly deferential old school caddie Peter Mullan – whose ginger beard is almost a character in itself – and his confident blue-eyed maverick son.

Fortunately, golf takes a back seat after the rather stolid male-dominated opening scenes, and just as we’re hoping for some intrigue it arrives in the shape of a flirtation between sparky Edinburgh waitress Meg, played by Ophelia Lovibond and young Tom, who eventually becomes his wife amid controversy about her dubious background. From then on, Tom’s rise to fame plays out against the glorious Highland settings of St Andrews, and seaside skyscapes of Musselborough, just outside Edinburgh. The most we get to see of the actual game is through the on-course confrontations between Morris and his rivals, as young Tom gets ‘a hole in one’ in all weathers.

TOMMY’S HONOUR succeeds largely for its cleverly paced tension as Lowden’s swaggering confidence is challenged by Mullan’s thoughtful dominance as a father whose mild-mannered influence quietly wanes. Together they bring flair to a film that otherwise might have been too clubby. MT