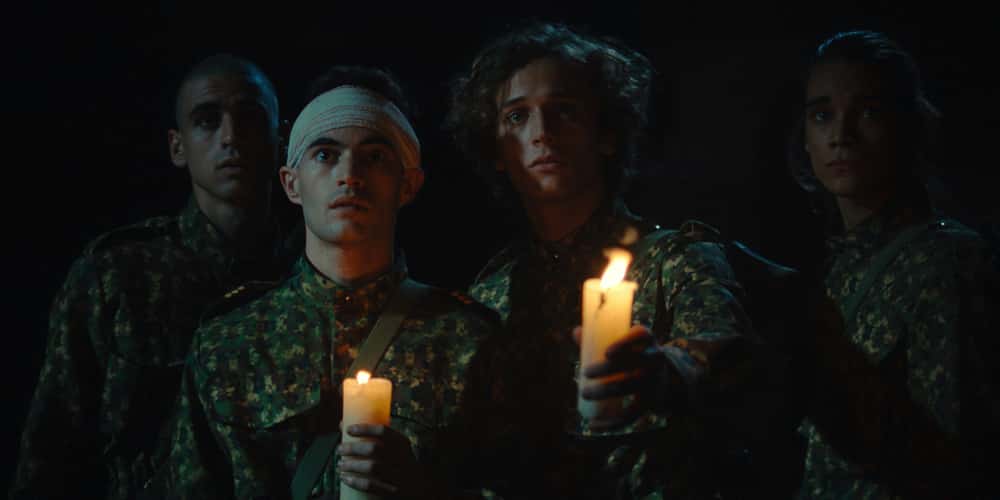 Angolan writer/director Carlos Conceicao delves into the bitter Colonial history of his country in this magic realist feature set in 1974, during the final year of Portuguese rule in Angola. With enchanting camerawork from DoP Vasco Viana, Conceicao lulls us into an alluring rhythm of seductive serenity despite the gruelling nature of the subject matter.

The struggle for freedom has been a painful and long-fought battle, particularly for the innocent bystanders caught up in civil war. Conceicao establishes the violent ambience in the opening scenes set in a small village where an Angolan tribal girl Tchissola (Balde) is given an amulet depicting the Virgin Mary by a Portuguese nun (Silveira). In return Tchissola sets out to bring repay her kindness in a journey curtailed by a Portuguese soldier who prays before making love to her, only to shoot her in a seemingly motiveless attack. Meanwhile, the nun is set upon by rebels, shooting into the air with their titular guns.

The action then shifts to a walled encampment where seven disgruntled soldiers are barracked along with their presiding sadistic colonel (Sumpta) who has fostered a hostile atmosphere amongst the men by ordering one of the group, Ze (Arrais) to shoot Prata (Mendes), the cook and food provider of the camp, suspecting him of being a traitor. Ze gains promotion and is granted a wish. Asking to visit his mother again but we later find out that he does not even known her name and is possibly the victim of abduction, his request an attempt to escape.

The young soldiers are bored and frustrated with being cooped up in the confines of the camp so they swim out into the lake where they find a picture of a young blonde woman, which they hang up in one of the dilapidated buildings. Wising up the mood of frustration the Colonel brings Apolonia (Moreira) a sex worker into the camp, but when Ze is too rough with her the woman tries to escape with tragic consequences for all concerned in the surrealist finale.

The irony of the conflict sequences often collides with the grim reality, but Conceicao handles these contradictions with consummate ease managing to keen the audience on tenterhooks throughout the film’s generous running time. Boosted by brilliant performances from its ensemble cast Tommy Guns is a unique and impressive film reflecting a horrifying episode from Angola’s turbulent past. AS