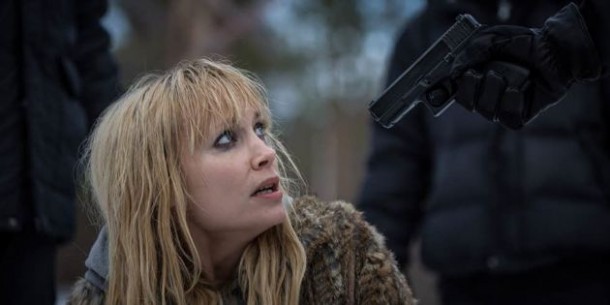 As dark and intransigent as a Swedish January, Erik Saleh’s TOMMY is a moody crime drama which is really all about a brave and beautiful girl and some very nasty men. The girl in question is Estelle, played by Nordic beauty, Moa Gammel, who plays a resilient but vulnerable gangster’s Moll in search of her husband’s share of the loot in one of Sweden’s biggest robberies. For all its arthouse creativity and sumptuous cinematography, Saleh has made an extremely brutal thriller where scenes of terrible torture (involving electric hobs) and sudden violence rupture the dreamlike quality of its atmospheric camerawork in and around a snowswept Stockholm. That said, TOMMY works best in these moments of tension in contrast to the softer scenes with Estelle and her daughter which often slow the pace, making it feel longer than its 93 minutes of running time.

Estelle is on a journey back to Sweden with her husband Tommy’s ashes – in the opening moments we see him being murdered on a beach in Sri Lanka, the victim of his own crime spree. Searching out his co-conspiritors for a share in the proceeds, Estelle pretends to all and sundry that Tommy is still alive and coming home to collect his winnings. But despite her shrewdness and cunning, she cannot compete with the murderous intentions of Steve (chillingly portrayed by Johan Rabaeus) and Bobby (Skyfall’s Ola Rapace) who are hardened criminals with no intention of playing by the rules. Best known for her Swedish TV work and films such as SUDDENLY and LAPLAND ODYSSEY, Moa Gammel’s portrait of fragility contrasting with the venality of the criminal underworld, is compelling from start to finish, marking her out as a sparkling star in the Nordic Noir firmament. MT

OUT ON DVD courtesy of ARROW FILMS