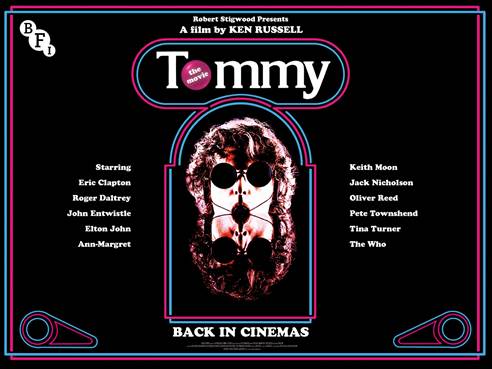 After his subtle and convincing art features for BBC 2, and his iconic dramas Ken Russell’s sortie into rock music suffers from bombastic overkill. The vibrant visuals are still astonishing, but Russell treats his narrative like an assault course. Hovering between a masterpiece and a manic mess, this is one of his worst features, and, not surprisingly he himself admitted that “Tommy is his most commercial film”.

The film is set in a wartime Britain. Captain Walker(Powell) and Nora (Ann-Margret) have recently become parents to the titular child Tommy whose childhood is getting off to an awful start. The young boy witnesses Nora’s lover Frank (Reed) killing his father, and he reacts with a catatonic stupor that makes his deaf, dumb and blind ushering the classic hit That Death Dumb and Blind Child. Moving on to his teenage years, Tommy (Daltrey) is neglected and abused, his wizardry at pinball being his only escape. There are some decent cameos, the best by Elton John, performing Pinball Wizard in his skyscraper boots. Also enjoyable is Tina Turner’s Acid Queen. Ann-Margret excels in her champagne detonation cum baked beans and soap suds explosion scene, whilst Reed and evil cousin Kevin (Nicholas) use Tommy as a scapegoat for all their own frustrations. This being Russell, it is no surprise that Tommy finally becomes the Messiah, climbing the mountain.

Russell is not interested in any form of dramatic structure, his aim is to set the night on fire with a slew of cinematic musical numbers: the relentless visuals, the gaudy design and the over-the-top acting of his stars excites the wild child in him and he is oblivious to the chaos and near incoherence. The music is based on the Rock Opera by Pete Townsend, and while fans will thoroughly enjoy the spectacle, although newcomers to the story might find it all too dated. But the main reason for a re-run must surely be Roger Daltrey’s sheer dynamism as a performer captured spectacularly by Dick Bush and Ronnie is this all singing and dancing seventies showstopper. AS

Opening at BFI Southbank, in cinemas UK-wide on 22 November 2019 as part of the major season