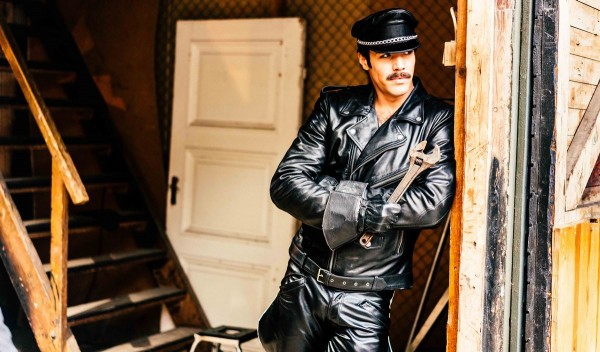 Dome Karukoski’s biopic about Touko Laaksonen – aka Tom of Finland – is a thoughtfully poignant and stylish portrait of an intriguing pioneer of Gay art in the second half of the 20th century.

We first meet Touko (Pekka Strang) in the immediate aftermath to the War living in Helsinki with his sister Kaija (Jessica Grabowsky) and suffering from the after effects of killing a Russian pilot. Kaija works in the art department of an local advertising agency and he joins her, developing his own art style after hours. At a time where homosexuality is still illegal in Finland, he also dabbles in cruising in the local woods where the Police are active in combatting the activity ahead of the 1952 Helsinki Summer Olympics. One of his ‘fuckbuddies’ Nipa (Lauri Tilkanen) later turns up as a lodger and romantic hopeful for his sister, leading to an subtly-played  menage a trois, a script device of Aleksi Bardy’s fractured narrative structure that, despite its occasional incoherence – largely due to the ambitious time period untaken – manages to convey a believable onscreen chemistry for the males, while dashing Kaija’s romantic hopes during an evocative summer interlude in the family’s blissful country house in the lake region.

TOM OF FINLAND is a painterly affair with some sumptuous cinematic moments, not only in the glorious outdoor sequences, but also in the Art Nouveau splendour of Helsinki’s architecture. The city’s downtown soigné offices and cocktail bars and the stylish interiors of Touko’s own apartment provide a showcase for the country’s iconic designs: Aalto chairs and Lindfors lighting. And the elegantly austere colour palette of Northern Europe contrasts well with the sun-drenched segments in ’70s California, where Touko’s work is finally published and earns the nom de plume ‘Tom of Finland’. There is a witty scene with the fanzine printer who suggests: ‘Tom of Sweden would sell more,” while the editor retorts: “But it seems, Finland has bigger cocks”. While Nipa struggles with throat cancer back home, Touko meets a local gay couple: Doug (Seumas Sargent) and Jack, played by Norwegian Jakob Oftebro, who become firm friends.

Despite the minor narrative setbacks, TOM OF FINLAND is enjoyable and fascinating to watch. Strang’s Touko is an appealing almost endearing character and his love for Nipa, a classically trained ballet dancer, is completely convincing and touching. Apart from his sister, Touka’s wider family remain completely in the dark, although it is clear in final scenes that he never got the family appreciation he justly deserved for his iconic style. MT