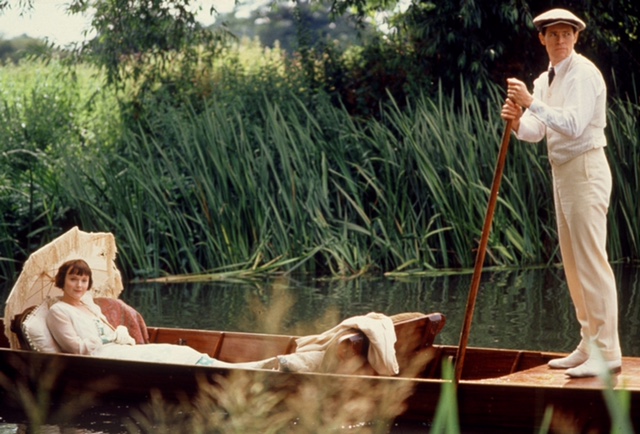 Willem Dafoe and Miranda Richardson are perfectly cast in this screen adaptation from Michael Hastings’ 1984 play. Brian Gilbert interweaves fact and fiction to explore American poet Thomas Stearns Eliot’s emotionally fraught marriage to Vivienne Haigh-Wood, which depicts rather a sombre interwar episode for the  ‘Bloomsbury set’: even though many of the characters are artists, the emotional climate is distinctly frosty.

TS Elliot (Dafoe) was born in 1888 St. Louis and hailed from a Puritanical background that prepared for the rigours of Merton College Oxford. In 1915 he met Vivienne Haigh-Wood (Richardson) and married her at Hampstead Register Office. Visiting the stately home of the Haigh-Wood’s, it becomes clear, that Eliot fell much more in love with the grandeur of the surroundings than his wife. Eliot, who always tried to be better at ‘being’ English than the English themselves, had great difficulty in expressing his emotions. He once gave a public speech proclaiming in all seriousness “that poetry is not an expression of emotion, but an escape from emotion”.

Vivienne suffered from a hormonal problem (which would have been controlled easily today), manifesting itself in mood swings and led to “a disregard for propriety”. Her heavy periods shocked her fastidious husband, who was a fanatic when it came to matters of hygiene. As for the lack of propriety, Vivienne’s misdemeanours would be considered mild by today’s standards: at a dinner party, she exclaimed in the presence of Virginia Woolf, that her husband Leonard had called Vivienne “a bag of ferrets round the neck of Eliot”; and at supper at her parents’ home she told everyone, that “Bertie [Bertrand Russell] wants to go to bed with me”.

The couple separated formally in 1933 and Vivienne was committed to a mental hospital in 1938 with the consent of Eliot, who was technically still her husband. Vivienne died in 1947 and Eliot, who at certain times used green face powder to underline his status as a martyr (over his desk hang a portrait of St. Sebastian), only saw her once in the last 14 years of her life. But, as Vivienne’s brother Maurice (another strong casting of Tim Dutton) states “Vivienne was the strong one. She made cowards of us all”. The siblings always enjoyed a close and warm relationship and Maurice suffered his own mental hardship as a soldier during the Great War.

Whilst mainly sticking to facts (like Vivienne proposing the title for what became “The Wastelands”), Gilbert also invents certain incidents to sensationalise Vivienne’s predicament, such as the occasion where she pours melted chocolate through the letterbox at Eliot’s place of work. In truth, his secretaries were often under order to tell his wife that he was out when Vivienne phoned.

Dafoe’s Eliot is frightening in his bland coldness, playing him like a reptile, ready to pounce on anybody displaying emotion. Richardson captures Vivienne’s febrile quality brilliantly; her performance is measured and pitiful; showing her sadly reduced to a recluse by a hormonal illness. Rosemarie Harris exudes gentle sympathy as a paragon of English respectability. Martin Fuhrer’s soft lensed images give the film an achingly romantic aura belied by the utter obnoxiousness of Eliot and the emotional wasteland around the couple. AS