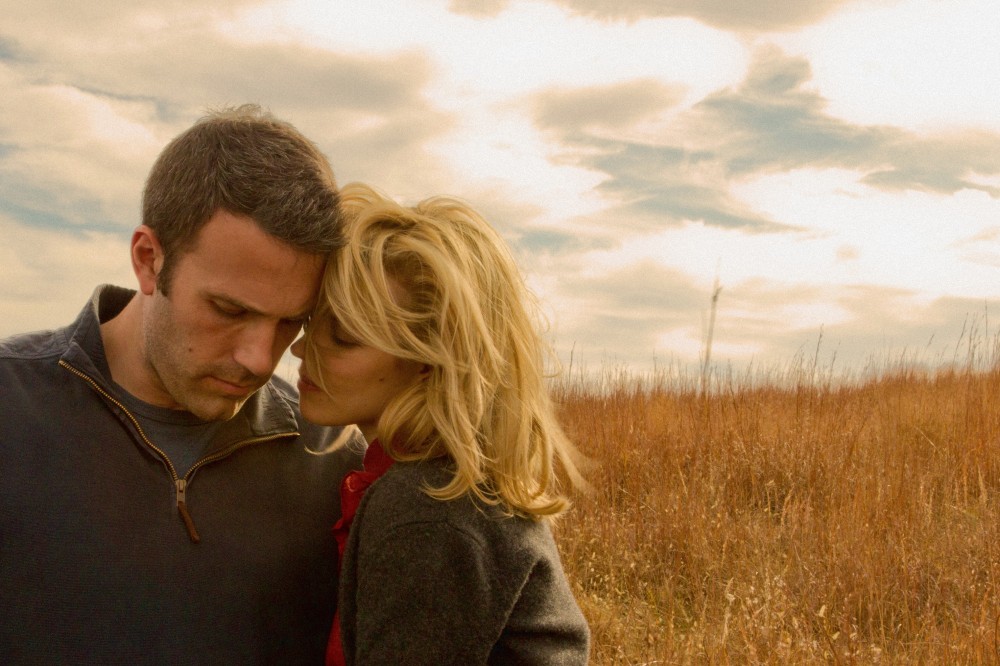 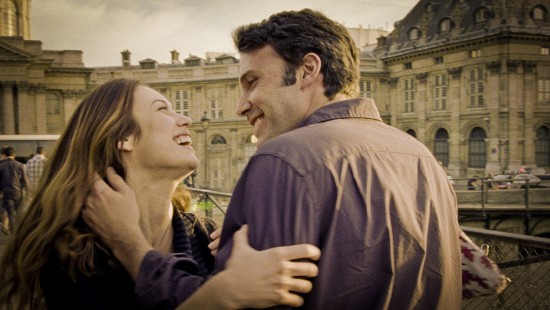 Terrence Mallick is back after the polemical Tree of Life (2011) with another poetic poser on existence. This time the quest for love is occupying Mr Mallick’s mind: “What is the Love that Loves us?” is his opening salve in a peripatetic drama that starts in Paris with its protagonists Ben Affleck (Neil, an American) and Olga Kurylenko (Marina, a Ukrainian) in the flurry of a whirlwind love affair. Mont Saint-Michel in the rain, pillow-talk and breathless whispers in the rippling breeze as the camera trips and sweeps over coast and countryside in a swirl of time and place all fused into one.

The action moves to Oklahoma for a homage to America is great. Not.  Sweeping images of corn fields, vast housing estates, cheerleaders and the disadvantaged. Our lovers rattle around in their vast new build while on the seedy side of town Javier Bardem’s honest priest Father Quintana has the hapless task of healing and helping the broken souls and bodies of those who have fallen by the roadside of the American dream. Bardem is convincing here as a troubled man of the cloth who is unconvinced of his own value to the community, who also seem to have tuned it to this diffidence Nevertheless, he ardently prays for guidance. Meanwhile our lovers are falling apart.

Oh I did try to like it but with no convincing storyline, no meaningful script, or dialogue and no real character development how can actors be expected to emote out of nowhere and engage our interest or sympathies.  How can we enjoy what feels like an empty, repetitive travelogue for a glossy magazine where plastic phrases are plucked out of the copy to excite us to read on: “You And Me” “Love makes us one” “You’ve brought me back to life” and all scored by a worthy soundtrack that somehow feels out of place and inappropriate and it’s Bach, Berlioz and Wagner we’re talking about here.

Ben Affleck makes a brave fist of Neil, haunting the breath-taking set-pieces like a cipher who can only smile, scowl and murmur platitudes. As Marina, Kurylenko twirls round and round endlessly, twittering mindlessly like a lustful 5-year-old looking for approval. Neither character appears to have any interests, real conversation, or even a worthwhile connection. In bed she asks him: “What Are You Afraid of?”: this is a phrase that speaks volumes yet no elaboration is given or scoped out and the question hangs in the air.  Exit Marina. In comes Rachel McAdam, a girl from Neil’s past who’s the same person as Marina only blonde, local and plump. No relationship, just more dissatisfied glances and increasingly desperate looks. And so it goes on.,

The highlight is the widescreen cinematography but even that starts to pale with the absence of a gripping narrative. To watch To The Wonder is to ride on a swirling merry-go-round that promises excitement but ultimately causes tedium and nausea until the desire to get off is so overwhelming you could scream.  Why is the talented, acclaimed filmmaker prone to making vacuous cinematic statements. MT