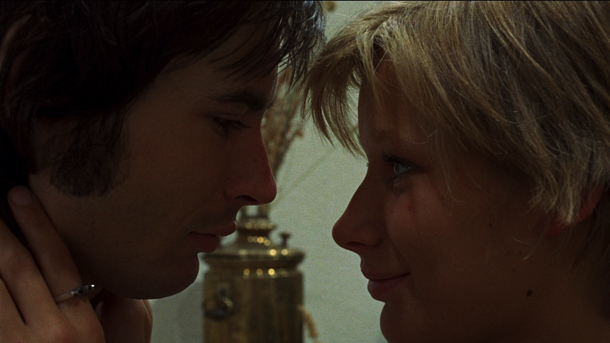 TO KILL THIS LOVE is Janusz Morgerstern’s best known film. Like many Polish directors of this era, he was pushed into TV work, after having proved to be too ‘difficult’ with his cinema output. TO KILL THIS LOVE is a bittersweet slice of seventies social realism but the tone is upbeat and breezy: Magda and Andrzej are finishing secondary school but are a few points short of university entrance level. Magda can start her medical studies in a year’s time,having worked as an orderly in a hospital for eight months. Andrzej too is preparing for university, working at a car repair shop. Their biggest problem is the housing situation, since flats are rare and landlords want some month’s rent in advance. Magda is living with her father, a middle aged engineer, who lives with Dzidzia, a woman, not much older than Magda. She is disturbed by her father’s subservient attitude towards his lover, and talks her father into giving her some money for a rent-deposit. But Andrzej is sleeping with the wife of the car repair shop, and Magda surprises the pair more or less in flagranti. On top of it, Andrzej has stolen a crucifix from his married lover, and sold in on the black market. Magda gives Andrzej a last chance, but is dismayed when she finds out about the theft and tempted into the arms of a surgeon at the hospital.

This narrative strand runs tandem a sad story between a handy man and a disobedient dog, who barks at all his customers. The two meet a tragic end.  Morgenstern shows seventies Poland as a gloomy world in which relationships suffer from opportunism and lack of equality. The central couple’ relationship flounders not so much because of the housing crisis (greedy landlords are not only a problem in communist Poland), but because of Andrzej’s crass materialism – he steals not only to pay for the rent deposit, but is addicted to money. There’s nothing new here in human terms but handyman Himilsbach’s love for his dog is the most touching aspect of the drama: like many people, he chooses a life with his dog, rather than being alone. TO KILL THIS LOVE is a melancholy poem about emotions becoming a commodity like everything else – not surprisingly, the authorities condemned it as “pessimistic” yet it presents a breezy view of seventies Poland. AS

SCREENING IN THE SCORSESE PRESENTS POLISH MASTERPIECES STRAND AT KINOTEKA 2015