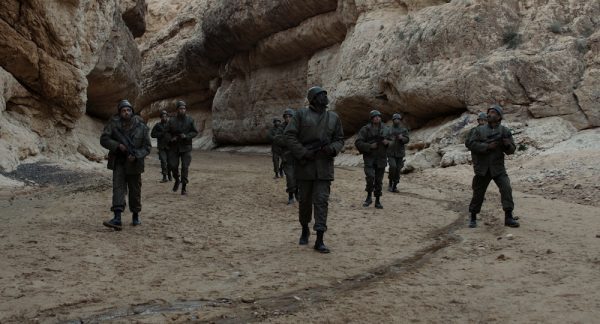 Tunisian director Ala Eddine Slim follows his striking cult debut The Last of Us with another visually alluring reverie that is rather too opaque for its own good. Verging on the biblical, it once again contemplates themes of isolation and our relationship with nature. The evocative storyline focuses on a loner caught up in the wanderlust of his desert surroundings in a atmospheric soundscape created by Oiseaux Tempete with mesmerising art direction from Malek Gnaoui and imaginative camerawork by Amine Messadi.

S (Miniawy) is a lieutenant in the army. State terrorism is the order of the day and we witness a brutal suicide. After hearing about the death of his mother S is overcome by grief and absconds from his army service to go home, becoming Tunisia’s most wanted man. S soon meets the newly pregnant F (Amara), a bored and unhappy housewife left alone in luxury surroundings while her rich husband gads off around the world. The relationship develops into something more, F enjoying the wilderness much more than her pampered home.

The pair communicate only with their eyes, these extreme close-ups inscribed with Arabic are an expression of intimacy, the motives being fear, desperation and a new found equilibrium on F’s part. The monolith in the forest is a nod to Kubrick’s 2001: A Space Odyssey, and Full Metal Jacket is also referenced in the military scenes. Slim uses extreme contrasts: light and dark, sound and silence, open spaces versus claustrophobia, tradition collides with modernity Many of the protagonists are mute, Slim drawing much from silent cinema, the characters whirl through time and space in this hostile terrain. Tlamess is a visual triumph, leaving the audience much room for interpretation. MT