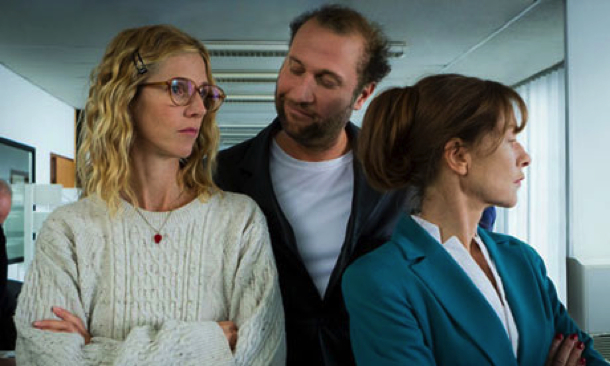 Serge Bozon’s second outing is an awkward comedy adapted from a paperback thriller by Welsh writer Bill James. The action is re-located to a multi-cultural suburb of Lille (with a large Arab population), Internal Affairs duo  (Huppert and Kiberlain) arrive in town to investigate the death of an informant amid wrongdoings in the local police force headed by Robert Mendes (Damiens).  With a mix of racialist politics, homophobic gags; all delivered dead-pan and based on France’s post colonial Arab tensions, it’s a strange beast that aims at comedy, more drôle than ‘ha-ha,’ but ends up misfiring and morphing into an awkward mix of farce and detective drama that even the charms of Isabelle Huppert and Francois Damiens cannot save.

Isabelle Huppert can do comedy: In Another Country she succeeded very well with her wickedly amusing, offbeat portrait of a French woman’s experiences in Taiwan.  But here, as Detective Esther Lafarge, she fails to lift the character off the page convincingly, lacking her normal fearless confidence with offbeat roles.  She also makes an uncomfortable pairing with Sandrine Kiberlain, who was wonderful in The Bird but here is out of place as her sllightly scatty colleague who acts more like a librarian than a policewoman. Even as an ‘odd couple’, they simply don’t convince.

The best comedy performance comes from Francois Damiens as Mendes and his bullish, arrogance is perfect for the role with some really funny episodes that sail quite near to the wind and might offend some audiences.  However, for the most part, it’s an uncomfortable film with forced performances and bursts of histrionic energy from Huppert and Kiberlain that feel out of place and strained in a detective story setting, despite its comedy pretensions.  That said, it will be interesting to see how the film is received in France, where quite possibly it could go down with more success.  Visually it has the steely feel of the eighties in a Northern town with Huppert’s lycra power-suits and Celine Bozon’s highly stylised cinematography. MT