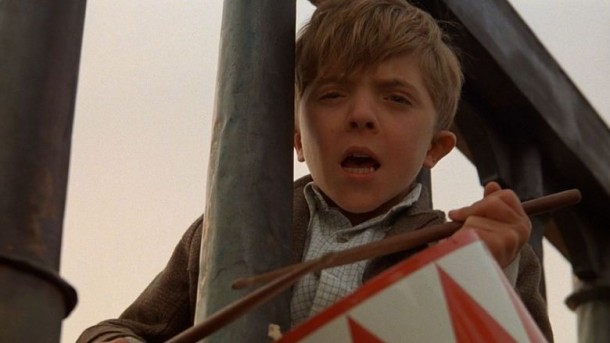 In 1979 Volker Schlöndorff’s The Tin Drum won the Palme d’Or at Cannes and the Oscar for Best Foreign Film. It was hailed as “a major artistic achievement” and one of the best adaptations of a major novel ever made. Thirty six years on is it that good? Yes, it’s remarkably good. There’s a great fidelity to the book’s themes and characters. Superbly cast and wonderfully staged, the film impresses with its narrative energy.

This bizarre fable concerns Oskar Matzerath, a boy who receives a tin drum on his third birthday. Retreating from the oppressive dinner table habits of his parents, Oskar deliberately stages his falling down the cellar steps, so as to stop himself growing taller. He lives in the city of Danzig (claimed to be both Polish and German territory in the 1930s) and is a witness to the rise of Nazism. Oscar not only drums but emits a high pitched shriek that shatters glass. The boy’s refusal/inability to physically grow can be interpreted as Germany’s denial to wake up and respond to the destruction it will inflict on Europe. Oskar will not mature, nor fully engage or protest, but simply observe catastrophic events.

The film stands or falls on the casting of Oscar. Twelve-year-old David Bennett proves to be an inspired choice. His big eyes, physical demeanour and harsh vocal tone is pitched to a thrilling and chilling effect. It’s a great performance. The Tin Drum is both very realistic and frequently fantastic. And David Bennett makes an obnoxious kid perfectly human and perfectly symbolic. Unfortunately, scriptwriter Jean-Claude Carrière also has to deal with the problematic, wordy symbolism of Günter Grass’s novel being translated into images. The scenes involving the eating of raw fish by Oskar’s depressed mother (Angela Winkler) work as a cultural metaphor in the book, but not in the film. Schlöndorff and Carrière give them a repellent surrealist sheen that’s peculiarly erotic. However they don’t unpack the density of such shock imagery. Any probable signs of the social/historical defects of German history are left untouched.

The film flounders as we try to puzzle out more odd behaviour. After his mother’s death, Oskar teams up with a bunch of circus dwarves (with its leader coming to wear a military uniform). The symbolism becomes questionable. Are they all collectively in denial or colluding with the state? The first three quarters of the film achieves a nuanced picture of Oskar and Danzig society. Later on we are never quite sure about Schlöndorff’s intentions concerning Oskar. His moral position is unfocused.

The Tin Drum has great production values (Oskar’s shattering of a church’s stained glass window and his drumming in a Nazi rally – resulting in everyone dancing to the Blue Danube – are wonderfully done). For most of its very entertaining 142 mins, the film is a gripping account of a nation going ‘mad’ viewed through the eyes of a maddening child. Igor Luther’s photography is first rate. And Maurice Jarre supplies (as always) a fine music score. Alan Price

THE TIM DRUM IS NOW AVAILABLE ON BLU-RAY.