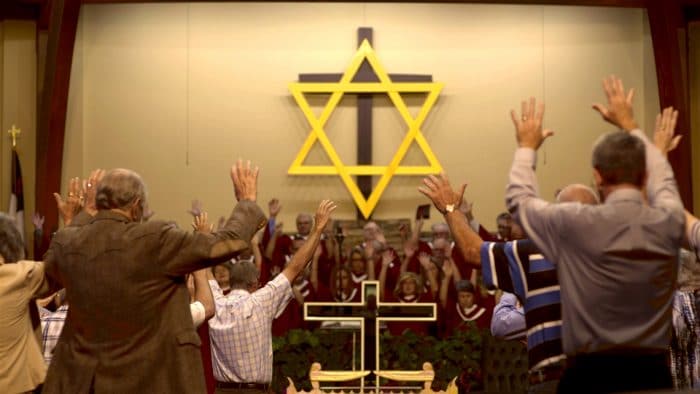 Maya Zinshtein and her writer Mark Monroe take an in-depth look into the unlikely bond between Evangelical Christianity and the Jewish State in America.

This is represented by US organisations CUFI (Christians United for Israel) and The International Fellowship of Christians and Jews (IFCT). The relationship between President Trump, who relies heavily on Evangelic Christians, and Benjamin Netanyahu, whose key support comes from orthodox, radical Settlers in Israel, had triumphant results: Trump moved the American embassy to Jerusalem and declared in January 2020, that Israel could not only legitimately hold on to everything they conquered in war but also occupy the Palestinian West Bank, “because it says so in the Bible”.

We meet Pastor William Boyd Bingham IV in the forest outside the small community of Binghamtown, Kentucky. Here just over a third of the population barely surface the breadline and child poverty stays at 49%. The Pastor takes out an automatic weapon and starts shooting practice. No doubt which side he is on: “We are the people who brought Donald Trump to power, and he pushes our agenda.” Like his father and grandfather, he is part of the evangelical Church and an active member of the IFCJ. The organisation was founded in 1963 by Rabbi Yechiel Eckstein and is now led by daughter Yael. The fellowship has donated over a million USDs to good causes in Israel. Naturally, the focus is the young – he even calls it indoctrination -, who are told that “Jews are better than us, and you need to except that.” His viewpoint rides roughshod over the Scriptures standpoint that Jesus will re-appear in Jerusalem, leading to a seven-year war and finally the battle of Armageddon witnessing the destruction of all but a few Jewish believers who must then join Christianity.

Higher up the food chain, Evangelicals like Vice President Pence and Foreign Secretary Pompeo are less concerned with biblical texts, but ‘real politik’. Meanwhile nearer home, at the banquet of ‘Friends of the IDF’ in the Beverly Hill Hilton, casino magnate and major Republican donor Sheldon Adelson saw the IFCJ donating major funds to the IDF (Israeli Defence Forces). Meanwhile,  President of the Foundation for Middle East Peace, Lara Friedman, claims that the state of Israel has written off all Jews in the USA who oppose Trump and his policies.

This detail-laden documentary adds further grist to the mill of donations to Jewish causes to the detriment of Palestinian ones.  On a visit to Israel with his flock, the gun-toting Pastor Bingham IV opines: “There has to be more accessibility for the church in politics. That’s God’s plan”. He is thankful Yael Eckstein pays his church a visit as she swings through streets where shops and houses are boarded up. Meanwhile, on the Church-funded Radio WMIK, an announcer is appalled “that bombs were thrown near to children… in Israel”.

In this sobering and depressing Zinshtein and Monroe show a bleak picture of funding and support – the bleakest part focusing on the  Kentucky Bible Belt who dream of eternal redemption. AS