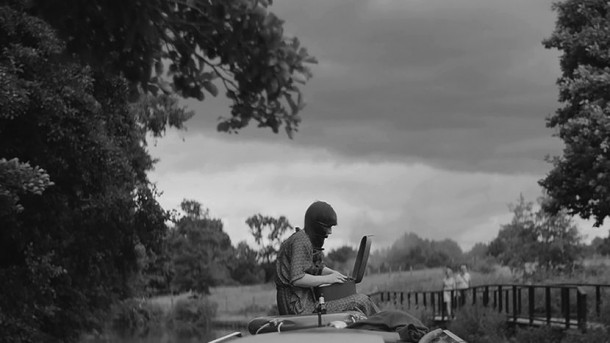 This blokish (+ a token girl) bonding trip certainly shoots the breeze and takes a long time to get going – the boat-owner’s instructions to the crew tell you everything you never wanted to know about canal boats. TIDES nearly comes to a standstill when they all get drunk and incoherent. Amanda (Rawnsley) is the only woman on board, for a fleeting visit. There are some nasty comments about Amanda’s parsimonious behaviour which soon surface when she justifiably tries to get out of paying nearly £200 for food and boat rental for just one night. The male crew then meander around in the water and it soon becomes clear that Jon (Foster) is dealing with a personal tragedy – but neither he or his mates shed any light on the circumstances. The only concrete fact that emerges about actor Simon (Meacock), married with a young child, is that his part as a ‘suspects’ in a long-running soap-opera, will soon be ‘killed off’ leaving him presumably without any means of financial support. A confident debut, TIDES would make a great twenty-minute short, but the narrative never comes near to justifying the lavish running time.