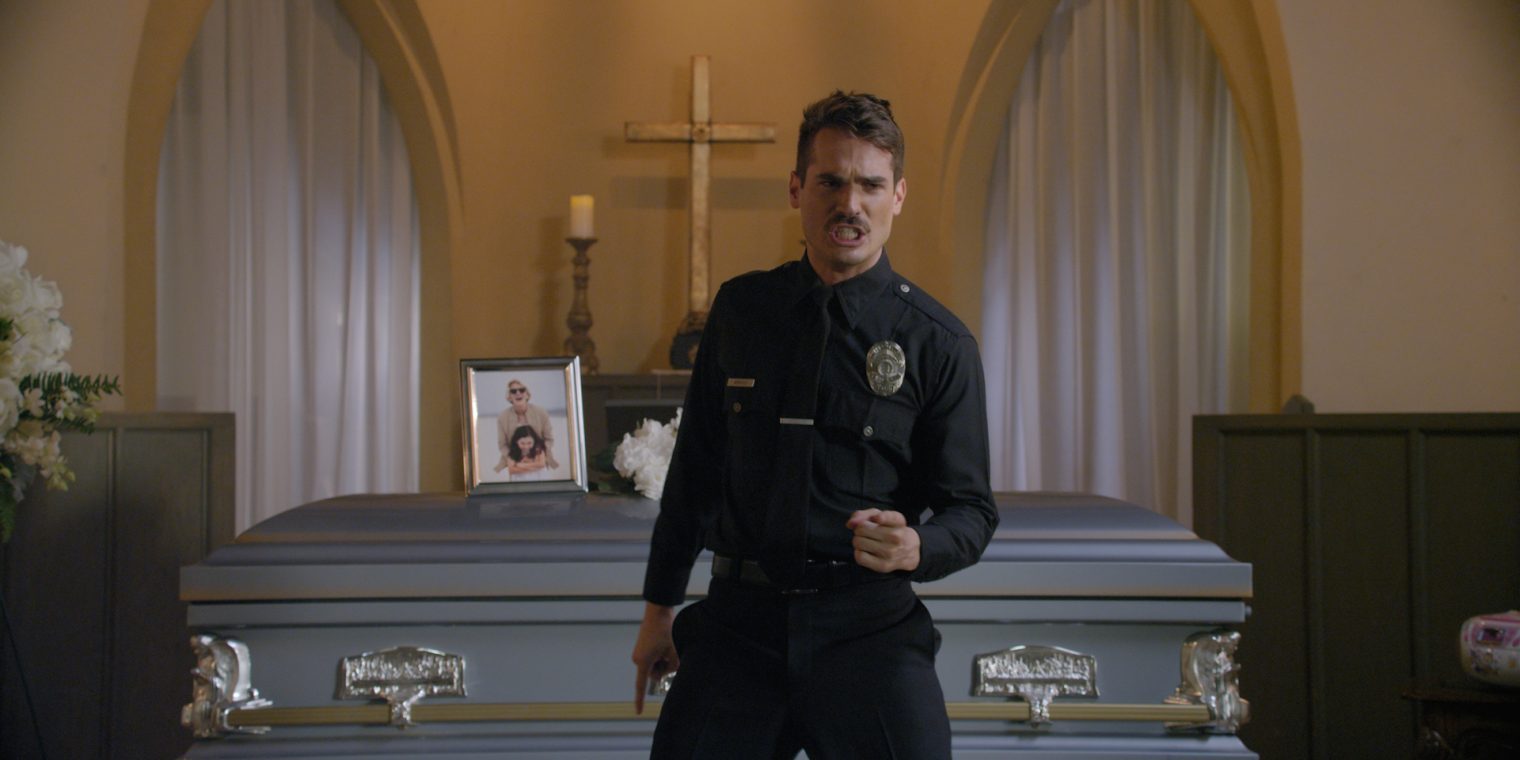 Director/writer/star Jim Cumming’s debut feature is a symbolic portrait of the white American middle-aged, middle-class male about to lose it all. Its anti-hero, Officer Jim Arnaud, is coming apart in every sense – and he doesn’t even know it.

The first take – unbroken, ten minutes long – sets the tone: police officer Jim Arnaud (Cummings) gives a eulogy to his newly-deceased mother at the funeral. Well, it is supposed to be a eulogy, but Arnaud loses his thread pretty rapidly: the speech is more and more about himself, his failures, his fears – of which there are many. He becomes a parody of himself when he tries in vain to play his mother’s favourite song, Bruce Springsteen’s Thunder Road on the pink toy-boom box of his daughter Crystal, making things worse by dancing to the non-existent music. Finally, he grabs Crystal (Farr) from her mother Rosalind (De Boer), and cuddles her helplessly crying in a back row.

Jim is in trouble: his wife is suing him for a divorce, he is partly suspended from work – all because he finds communicate difficult. He tries out phrases from a self-help book, such as “this means a lot to me” – but he gets in the way of his best intentions, always ranting on about his bad luck, great plans and guilt, loosing who ever he is talking to – with the exception of fellow officer Nate Lewis (Robinson) who has the patience of a saint. But it is not just only the dyslexia and dyspraxia which undermines Jim: his anger about his diminishing status turns into violence, and finally he throws a tantrum at work, drawing his gun on his fellow officers, and is lucky to escape with a dismissal. There is not much family life either: his sister Morgan (Edmundson) is also deeply depressed, and daughter Crystal is showing signs of male-adjustment disorder at school where Jim, talking to her teacher, is again unable to relate to the topic, reacting with another violent scene. The final tragedy will leave him with too much responsibility to carry and the audience rightly fears for his future.

Jim Arnaud is unaware of himself and his destructive narcissism, which might even be in the lower range of the Autism spectrum. But he shares his anxieties with too many around him: this is just not Jim coming apart, but a whole spectrum of white America, fearful of losing their middle-class status, getting poorer, suspecting (rightfully) that their children will have a worse life than themselves. It’s the end of a dream: the American Dream. His ranting is like that of a wounded animal, who does not understand what is happening to him.

Cummings is brilliant in all his triple roles, and the ensembles acting is very convincing. Lovell A. Meyer’s camera moves around furiously: his images portray the emotional roller-caster Jim finds himself on. Carefully avoiding a sentimental approach, but always with poignant humour, Cummings’ excels himself. AS.