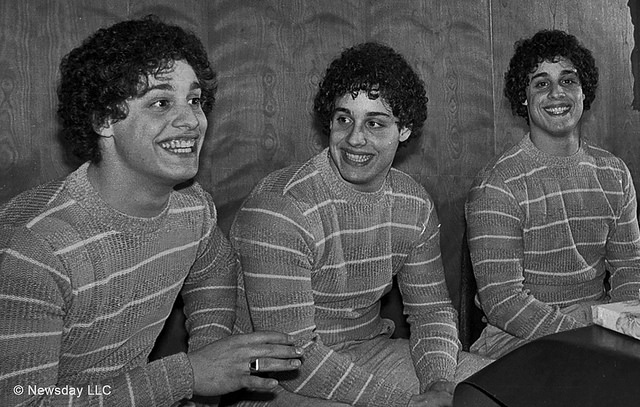 In 1960, a world-renowned child psychiatrist, Austrian-born Peter Neubauer (1913-2008) began a long term study of twins (at least five sets) and triplets (one set). The babies were separated, and fostered by chosen sets of parents, being tested and observed over a period of more than ten years by Neubauer’s associates. In the end, at least three of the test group committed suicide.

Director Tim Wardle (Lifers) tells the story of the triplets in this astonishing docu-drama. In the late summer of 1980, 18-years old Robert ‘Bobby’ Shafran started his studies at Sullivan County Community College in New York. He was more than surprised that everyone greeted him with “hello, Eddie”, particularly girls were happy to see him, hugging and kissing him. Finally, a fellow student, Michael Domnitz told him: “You must have a ‘Doppelganger’. The two found the address of Eddie Galland, and when the door of the Galland house opened, Bobby was looking at his double. They soon found the last triplet, David Kellman, and what ensued was a typical American feel-good story. The triplets appeared on TV (The Phil Donahue Show), admitting to their similarities in the taste of cigarettes and women and even appeared with Madonna in Desperately Seeking Susan. Later, they opened a restaurant (Triplets) in New York; but after an early success, Eddy developed mental health problems, and he had to be committed into a psychiatric ward. In 1995 he took his own life. For the remaining brother, David and Bobby, this was only the beginning of their nightmare.

The three of them had been born on 12.6.61 to a mother the triplets had met. She had mental health problems, and the adoption was handled by the Louise Wise, Jewish Adoption Agency. They were closely connected with the Jewish Board of Family and Children’s Services, who sponsored Dr. Neubauer’s ‘research project’ together with the National Institute of Mental Health. The former institution now claims “that they do not approve of Dr. Neubauer’s project”. Neubauer’s aim was to research the central Nurture versus Nature question, and the ‘participants’ were regularly tested regarding their intelligence and personalities by a large number of child psychiatrists. One of them, appearing in this documentary, seemed totally unperturbed by his participation. The same goes for Natasha Josefowitz (90), a long-time research assistant of Neubauer, who now lives in California. She comments with the objectivity of a true scientist “that she was surprised that Nature was so much more influential than environmental influences”.

Set against this “objectivity” are the stories of the boys parents, who all reported the babies hit their heads for a long time against the frame of their beds – obviously withdrawal symptoms, after they were forcefully separated. A set of twins, Paula Bernstein and Elyse Schein, who had both chosen to become filmmakers, before they were re-united wrote a Memoir: “Identical Strangers: A memoir of Twins Separated and Re-united”. Journalist Lawrence Wright, who was the first, to bring the cover-up to light in the New York Times, also appears in the documentary.

Although Neubauer’s research project dossier – in the archives of Yale University – cannot be opened before 2066, with some survivors only getting very redacted versions of the case notes, the question remains – how could Dr. Neubauer, President of the Association of Child Psychoanalysts, Secretary General of the International Association of Child Psychology, have dreamt up a project like this?. Neubauer had fled the Nazis to study in Switzerland, before emigrating to the USA in 1941, and worked with Anna Freud, so he must have known about Mengele’s experiments with twins in Auschwitz and later Argentina. Did science really make him blind, or do we have another case of a scientist playing God and bringing death to the ones he was supposed to help? Three Identical Strangers is a chilling tale of our times, connecting us to a world we thought we had left behind. AS