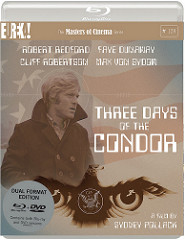 Based on a CIA conspiracy to take over Middle Eastern oil fields, Cold War spy thriller Three Days of the Condor is also a smouldering love story fired by the sizzling chemistry of Robert Redford (as Joseph Turner – The Condor) and Faye Dunaway (Kathy Hale) whose serendipitous meeting occurs when Turner kidnaps her on the run from a group of assassins who have previously shot and killed his entire CIA department during his brief absence from the office to grab some lunch. Turner is training to be a analyst when he gets embroiled in a complex political conspiracy and winds up wondering whom he can trust and who is the bad guy, as he goes it alone. As it happens, Hale falls for her captor and decides to help him – and bed him; exuding supreme sexual allure and vulnerability, as only Dunaway can (she starred in Chinatown in the same year). As Turner, Redford convincingly portrays a decent man whose paranoia leads him into the unknown in a situation where anyone he meets could be a disguised killer out to murder him. During this compelling political thriller, Redford crosses paths with Max Von Sydow’s Joubert, one of the chief suspects in his self-led investigation. The suave Swede is dynamite as the enigmatic antagonist of this classic Sydney Pollack outing, shot by ace cinematographer Owen Roizman (The French Connection) with a sultry seventies score by Dave Grusin, who won a Grammy for his original theme music to The Graduate.  MT