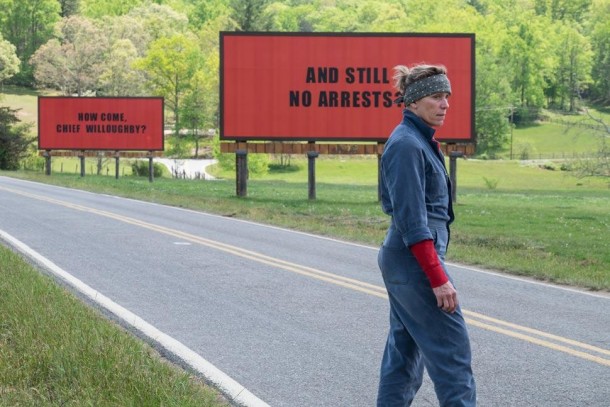 In Martin McDonagh’s latest pithy social satire a frustrated and grieving mother antagonises her local police force calling to attention the lack of progress in the search for her daughter’s killer.
Confrontation is the name of the game in this unforgiving black comedy set in the Southern United States. Conflict is rife, incendiary arguments erupt, nearly everyone resorts to violence, be it for political or personal reasons. Grudging forgiveness sometimes follows, but not necessarily as a matter of course. Frances McDormand paints the heroine Mildred as an unlovable tyrant, in the smalltime, small-mindedtown of Ebbing. A divorcee, she has lost her teenage daughter, who was raped and left to  die almost on her doorstep. After a month, the terminally ill sheriff (Harrelson) has not come up with any suspects and the trail has gone cold, so Mildred pushes her own agenda forward, renting three billboards with a strong message accusing the sheriff of incompetence. This is not a particularly sensitive move but it’s an effective one, sending the townsfolk into quiet meltdown against the mother of three. Meanwhile, the much-liked Willoughby is dying of cancer. But Mildred’s vendetta knows no bounds and she finally takes her complaint further, leaving DC Dixon (a strong comedy turn by Rockwell) with terrible injuries. Strangely enough, Dixon seems to learn his lesson and channels his energy into re-opening the case. Dixon and Mildred begin a friendship, but not on the lines the late sheriff would be approve of.
McDormand is brazenly brilliant as the hard-bitten Mildred who conveniently forgets that she argued with her daughter on that fateful last evening, jokingly wishing that she would be raped for not following her advice. Race, gender, anger and forgiveness are the are all in the mix in this toxic town where casual violence is par for the course.  The narrative is anger-driven rather than goal-oriented, and the fun is very much in the process rather than the solution: this is no whodunnit. THREE BILLBOARDS is very dark, shot through with brutal stabs of humour: DoP Ben Davis catches the mood with his stark, widescreen images. This is Trump country, and the Confederate Flag rules. God help America. AS

Martin McDonagh was born in London to Irish parents. He is a renowned playwright and filmmaker, and won an Academy Award for his debut short, Six Shooter (06). He subsequently directed In Bruges (08) and Seven Psychopaths (12), which played at the Festival and received the Midnight Madness People’s Choice Award. Three Billboards Outside Ebbing, Missouri (17) is his latest feature.