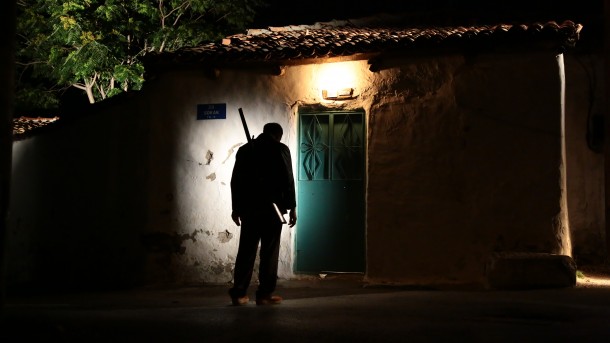 Man is Created By Anxiety – Euripides

Elegantly shot in pristine black and white, Onur Ünlü’s obsurdist drama unspools as a series of satirical and poetic contemplations on the human condition. Blending fairytales with touches of surrealism and poetic realism and whimsical observations explored through the daily life of a melancholy barber in a Turkish village, it is a curio may enchants or amuse or even irritate.

Cemal (Ali Atay) lives with his fathe, having lost his mother and siblings in a fire. His neighbours are a doctor, an invisible teacher and a girl who can control time with the clap of her hands.  Ünlü tries his hand at a range of special effects to tell his story – from slow mo, jump cuts and even back projection – the result is clever and effective for the most part and his ironic sense of humour adds a much needed levity to Cemal’s moody demeanour and mournful existence dwelling, for the most part, on negativity.

The film’s whimsical approach will appeal to devoted arthouse and festival audiences but those looking for a traditional drama may lose track of its endless flights into reverie and occasionally slow-paced narrative – this is essentially an everyday story of the trials, tribulations, occasional joys and passions of everyday life but told in an enchanting way. MT.