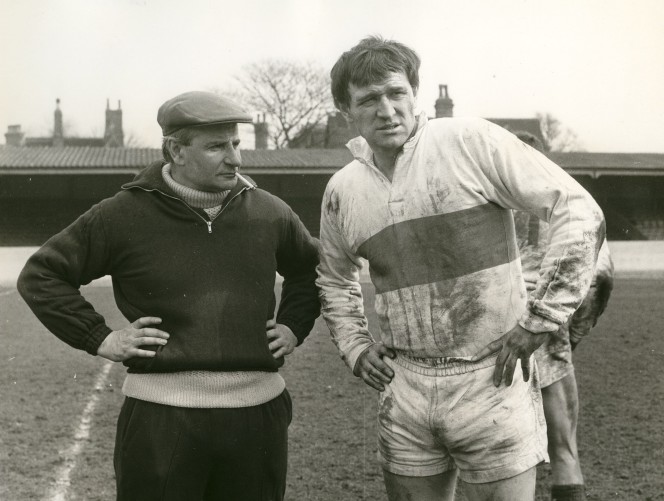 This Sporting Life is set in the recognisable 1960s Wakefield of Northern England but is much more than a working class drama, with its stark and primal themes of death and life struggling to escape loneliness. This is no ‘Who’s Afraid of Virginia Woolf’ tearing down of a destructive and murderous relationship but an irrational attempt to start a wrong and destructive one. And the power of this harsh yet often very tender film derives from David Storey’s fine novel, genuinely inheriting the influence of D.H. Lawrence, adapted by Lindsay Anderson’s acute direction.

Frank Machin (Richard Harris) becomes the rugby player hero of the town. Yet heroes can fall. Frank is injured in a game and needs urgent dental work. Whilst Frank is in the dentist chair, Anderson narrates his story in flashback: how he got to be a rugby player and struggled to convey his love for the widow Mrs. Hammond (Rachel Roberts). THIS SPORTING LIFE is not even a film about sport. The rugby story takes second place to the psychological drama. Anderson succesfully conveys what he intended: “ordinary uncelebrated life on film” but through the prism of an extraordinarily mismatched couple.

Of course the film is also a story of class conflict; noveau riche dissatisfaction; male friendships; neighbourly suspicion and existential doubts – the latter voiced by team board member Stoner (Arthur Lowe) who wonders if Machin is really “the right kind of player” for them. For Machin turns out to be a unpredictable brute force that Mrs. Hammond, Machin’s manager, Mr. Weaver (Alan Badel) and his wife Judith (Anne Cunningham) eventually disown: Frank’s fatal ‘limitation’ is that he’s always just “A great ape on the football field”.

The film comes at the very end of the British New Wave and portrays a bleak Northern location in the same manner as earlier films such as A Taste of Honey, Saturday Night and Sunday Morning and A Kind of Loving. Yet it’s far less ’sociological’ than those productions, being more of an art movie without any self-conscious artiness. Lindsay Anderson’s audacious cutting has the shadow of an Alain Resnais edit over him.

There’s also a probable projection of Anderson’s own sexual repression into the film. A fair amount of explicit imagery is centred round the macho play, away from the rugby field, of the footballers and the patronising and tactile gay character of Mr. Weaver. It’s interesting that athough This Sporting Life appeared three years after Saturday Night and Sunday Morning (again starring Rachel Roberts) there’s no direct heterosexual sex scene. The only bit of bare flesh is when Machin attempts to finger Margaret’s top and dress. Then Anderson cuts – not to the bedroom – but sometime later, after they’ve had sex and are physically and mentally dressed again to re-commence their ‘battle.’

For me THIS SPORTING LIFE is a great British film full of superlatives and impeccably cast. Richard Harris and Rachel Roberts give magnificent and electrifying performances – both were nominated for Oscars. All the characters ring true as authentic participants in this tragic story. Anderson’s brilliant direction (this was his first feature) is harnessed to Denys Coop’s beautiful photography and Roberto Gerhard’s brooding and off- kilter music score. David Storey’s film script (his first) was strongly influenced by the observations of Richard Harris, discussed with Anderson. The result is a merging of collaborative talents that Storey generously delivers.

Approximately fifty four minutes into This Sporting Life Margaret Hammond allows herself to smile for the first time. She’s watching her two young children playing with her lodger, Frank. They’re relaxing in the countryside having been driven there in Machin’s car and ostentatious symbol of his sporting success. Margaret’s emotional ice is thawing. It’s not quite happiness but a moment of respite from her repression and suppressed guilt over the death (likely suicide) of her husband. In a film of raw and painful confrontations it’s a very moving and lyrical episode: a welcome pause in an impossible relationship charged with anger, longing and frustration. For the ‘lovers’ arguments appear driven by forces of love and hate that they don’t fully understand. As an audience we watch and think we know better – that this couple is so incompatible. But don’t we also make wrong choices that push us to extremes?

The intense passion of This Sporting Life places it on par with Davies’s Distant Voices, Still Lives and Losey’s The Servant. All three eloquently convey the pain and struggle of being alive and striving for a workable identity against a backdrop of class, hypocrisy and power. Such a very English ‘wild bunch’ remains an international cinema of continuing importance and value. Alan Price©2017 *****

THIS SPORTING LIFE IS NOW ON BLURAY