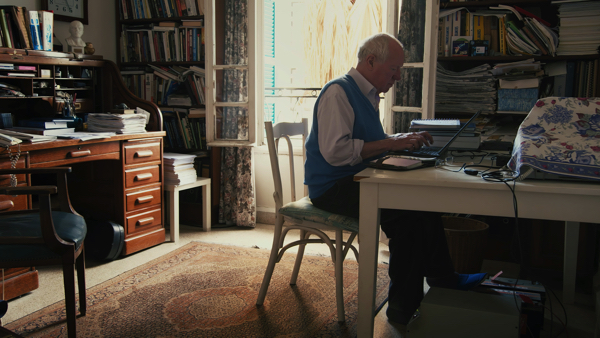 Canadian director/co-writer Yung Chang (Up the Yangtze) creates an energetic portrait of British war journalist Robert Fisk (*1946), who has chronicled conflict zones from Northern Ireland to the Syrian atrocities. After more than five decades in the field, and now living in Beirut since 1976, Frisk is seven times winner of the British Press Award’s International journalist of the year.

Alfred Hitchcock’s highly romantic drama Foreign Correspondent, was the kicker that started Fisk’s fascination with journalism. Growing up in Maidstone, Kent, he is fluent in Arabic after working in the devasted cities of Syria and the occupied West Bank. His father was a soldier in the Great War and refused to execute an enemy soldier “the only action my father undertook, with which I could identify”.

After starting with the Sunday Express he later changed to The Times, which he left after the Rupert Murdoch takeover, and has now found a home at the Independent, covering wars for the digital edition. Fisk interviewed Osama Bin Laden three times between 1993 and 1997. In the first article, he called Bin Laden an Anti-Soviet mountain warrior on the road to peace. The “mountain warrior” must have been impressed by the journalist, because he tried to convert him to his cause. Fisk also covered the Sabra and Shatila massacres in 1982, when the Israeli Army turned a blind eye to the Falange soldiers who massacred Palestinians in refuge camps. On the ‘phone to his current editor, Fisk has to explain why he made the reference in his report. Losing his patience, Fisk tells the man he should look it up on Google and try to make the connection.

Director Chang is as much a purist as is Fisk. When asked in an interview about his position in the question of film versus digital, he admits:”there is a grain, a quality and a depth to the image that is unmatched in digital video.” Some images were shot in 16mm by DoP Duraid Munajim, but did not make it into the final cut. But the still photos shot during the production are in 35 mm.

Fisk has always challenge the objectivity of “balanced” journalism, his viewpoint is visible throughout his work when he tries to interrogate all sides of the conflict. Whether in Homs, Aleppo, Douma or Palestine, he “is neutral and unbiased on the side of those who suffer”. In contrast to the mainstream media, he gives voice to the unrepresented. Both Chang and Fisk share a passion for travelling, and being taken out of their comfort zone. The dirctor is full of admiration for his older counterpart: “We started when Fisk was around seventy-two. But he is still active, still thinking and still writing incendiary articles and cracking forward-thinking stories. This had to be an active story.” AS