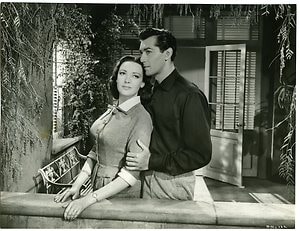 Just as birds descended from dinosaurs, so the film noir of the forties morphed by the mid-fifties into the women’s picture; the histrionics of the Technicolor ‘Leave Her to Heaven’ (1945) evolving into Douglas Sirk’s throbbing fifties melodramas.

Occasional additional forays into Technicolor along the way in crime dramas like ‘Desert Fury’ (1947) and ‘Rope’ (1948) gave hints as to the way colour could embellish thriller material; and the fuzzy Pathécolor employed on ‘This Is My Love’ – along with the incredibly stagy sets – draws us gradually into what initially seems to promise to be a rather bland romantic drama, but proves anything but.

The presence of Dan Duryea warns us that peril lies ahead – and the fact that he’s in a wheelchair, in which he proves a pretty nifty mover – simply heightens the pent-up menace he brings to his part. (And wouldn’t you know it, he depends on medication administered by his long-suffering wife and sister-in-law to keep him alive?)

Practically everybody in the film turns to be nursing bottled up emotions threatening destructively to burst their banks in true 50’s style, and… but I won’t spoil it for you. @RichardChatten