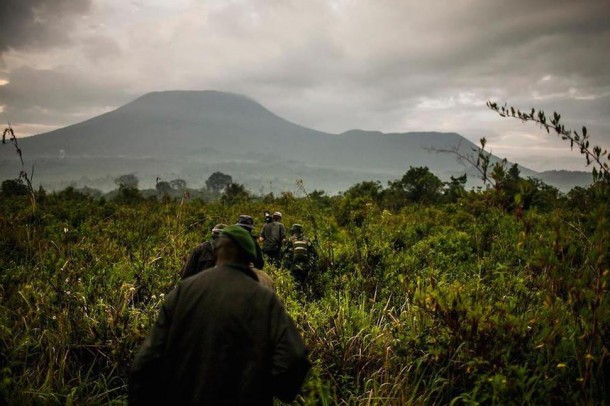 Magnificent landscapes give way to mass murder and mayhem in This Is Congo, Daniel McCabe’s cinematic documentary that follows several of his compatriots surviving twenty years of conflict in this war-torn nation. Congo’s leaders have chosen war in place of an intelligent way of harnessing the country’s abundant mineral wealth, and ensuring peace and prosperity for its people.

Most of us have never been to this lush mid-African country three times the size of Texas. Fertile soil encourages agriculture and provides a rich cocoa-dusting for the country’s ample mineral reserves of tourmaline, manganese, copper, bauxite and gold.

McCabe knows from experience that filming will be dangerous here and certainly gives a flavour of the perils in the opening scene where booming mortar fire sends tremors through our seats while onscreen the fleeing Congolese protect their kids and livestock  on the run.

Bordered by Rwanda and Uganda, The Democratic Republic of Congo sounds like a country of the free and enabled. It is quite the opposite: a place divided by macho rebel forces, such as the M23, who compete with rival militia groups while the government-led forces continually strive to keep control and calm the masses under the auspices of Colonel Mamadou Ndala who eventually loses his battle – in the surprising final scenes – not to the enemy but to his jealous officers threatened by his energy and charisma.

Voiced by the melodic tones of Isaach de Bankole), the real heroes of the Congo are not the generals and fighters but the enterprising civilians: voluptuous business woman Mama Romance who trades precious gems in the main port of Goma and tailor Hakiza Nyantaba who traipses from village to village with his trusty Singer sewing machine. With great sensitivity and dispassion, McCabe shows us a nation surviving against the odds, its people forced into a peripatetic mode of existence, cheerful and philosophical despite their trial and tribulations. MT