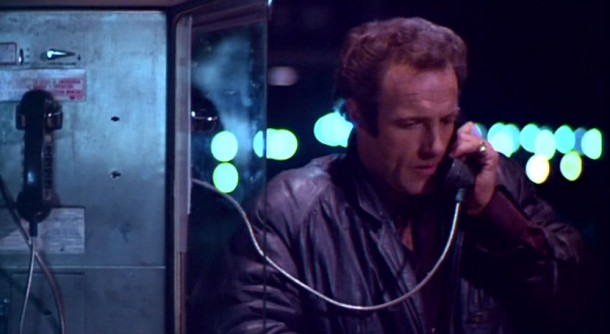 For his feature debut THIEF Michael Mann (Manhunter, Miami Vice) delivers a perfect action movie and a philosophical discourse on the unattainability of the American Dream. Frank (Caan), a middle-aged professional safe breaker who has honed his skills in jail and now wants to press a button and settle down to a ready made family and a financially secure life. To remind him of his goal, he carries a postcard with cut-out motives of middle class happiness. In order to achieve this, he has to do a last caper. But instead of working with his own crew, he agrees to work with Leo (Prosky), a big crime lord.

Frank’s choice of a woman, the vulnerable, disillusioned and poorly paid Jessie (Weld), demonstrates his powers of projection: he wants to save her as much as himself. Needless to say, things don’t go according to plan. Frank’s personal life changes in 24 hours: he loses a father figure, who “told him everything about the job”, who dies of a heart attack after spending too much time in jail – Frank can’t make good his promise to spring him loose. His substitute father figure, Leo, procures a baby for the couple, after they are turned down at an adoption agency. The preparations for the job take Frank’s mind off family life; his trust in Leo is unshakable, as is his near religious belief in a happy, carefree life after crime.

The success of the heist brings in millions of dollar in form of small diamonds, but then Leo presents Frank with just $85000, the amount missing a zero at the end of his agreed share. Strangely, Leo presents an intact family life as an excuse for cheating Frank, who, after watching one of his men killed by Leo’s hired men, goes into an all-out war with Frank and his numerous enforcers. Even though action scenes dominate through pure force, Frank’s loneliness is the central aspect of THIEF. Even in the company of his men, he is the lone wolf – he takes his responsibility for them very seriously, a sort of “Pater Familias” in the crime world. His relationship with Jessie is founded on his wishful thinking, that they can both escape their past. Leo turns from a benevolent godfather into a brutal killer, whilst still keeping his identity as a family man – Frank, so skilful at work – is too naïve to see Leo’s game right from the beginning. Frank is the real outlaw, fit for any Western.

Well-cast and fabulously crafted, Donald E Thorin’s camera-work is brilliant, long shots show the city of Chicago as a decrepit background, Kentish Town on a bad night. It never really gets light, and the night drives are exceptionally emotive. Caan and Weld are a couple lost in their dreams for a future they were never made for, and Prosky’s Leo is one of the best all-time baddies. Frank Hohimer’s novel is the basis for this sleazy chronicle of unobtainable respectability. AS

A LIMITED SLIPCASE EDITION OF THIEF IS NOW OUT ON BLU-RAY INCLUDING TWO VERSIONS OF THE FILM, THE ORIGINAL THEATRICAL CUT AND AN EXTENDED DIRECTOR’S CUT. £19.99 COURTESY OF ARROW FILMS.