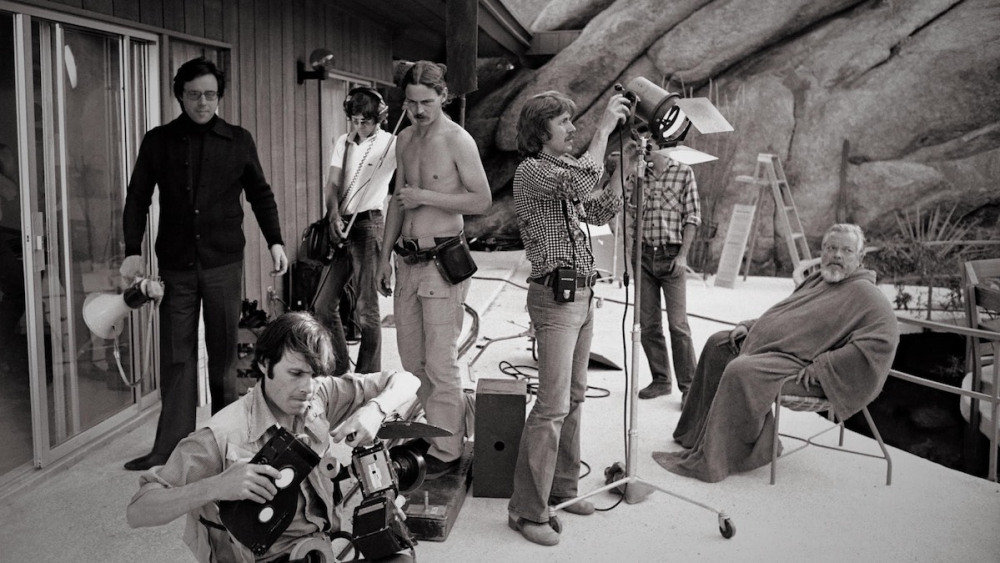 Morgan Neville (Won’t You Be My Neighbor?) is back with a new doc that serves as a useful companion piece to Welles’ rather haphazard metaphor for the madness of the industry that tormented him: The Other Side of the Wind (2018).

Working with footage from the film itself, which started life in 1970, and complementing it with informative interviews and other Wellesian treasures, They’ll Love Me When I’m Dead has a spirited and haphazard style that aims to capture the creative butterfly that was the larger than life, Orson Welles (1918-1985).

Those who wonder whether the world needs another Orson Welles documentary will do well to bear in mind that this Netflix affair will reach an audience that may not even have heard of the man and his genius, so the doc will hopefully find a completely new following along with its committed fanbase, amongst its viewership.

The title apparently refers to the pronouncement that Welles once made in reference to those film financiers and ‘powers that be’ who deserted him when he needed their help. And it’s reassuring to know that the film has finally been completed by those who have ultimately leant their support.

Neville has certainly set himself a tricky task but he pulls it off with the usual aplomb. His previous documentaries have been very well received: 20 Feet From Stardom (2013); Best of Enemies: Buckley vs. Vidal (2015) and Won’t You Be My Neighbour (2018). And he’s also brought his own creativity to this outing with its inventive camera angles and black & white to ease cohesion with the archive footage. The film’s interviewees were all close friends of Welles: associates Peter Bogdanovich and Henry Jaglom. This documentary’s executive producer Frank Marshall also worked on the Wind shoot and produced the reconstructed film. And there is historian Joseph McBride, who appeared in Wind. Neville’s doc also serves as a tribute to the late Gary Graver, who shot Wind and served as his personal DoP for over a decade, putting his own career and family on the back-burner, in the same way that Leon Vitali dedicated his life to Stanley Kubrick.

The story of the experimental project that was Welles’ main focus for the final 15 years of his life unfolds before us in the velvety black and white sequences. Welles once said that Wind was inspired by his belief in “divine accidents” – and this is one thing that seems to unite the genius with his fellow filmmakers: Every director from Martin Scorsese to William Friedkin reports on these serendipitous moments, and Welles was no different. Wind was repeatedly re-worked and rewritten in a narrative that followed the last day in the life of a veteran film director called Jake Hannaford  (purportedly Welles himself, although he denied it) who was played by John Huston.

Ironically, Peter Bogdanovich started off hero-worshiping Welles, until his own success as a director saw him supporting Welles’ and even offering him accommodation in his own house, with Welles almost outstaying his welcome. But his romantic companion, co-writer and collaborator Oja Kodar, who worked with her paramour on another unfinished project The Deep (1970), remains an enigmatic presence here.

Sadly, Welles’ initial effort to raise finance for Wind remains the most poignant aspect of his endeavour, and the footage of his speech to the AFI in this veiled attempt to garner support, makes for disheartening viewing. The final scenes of the documentary see Welles speculating on the nature of Wind: “maybe it’s just people talking about a movie.”

Neville certainly gives us a great deal of background about Wind in his documentary, but there is very little on the subject of how the film eventually made it to our screens in 2018. And it’s because of this slight flaw in Neville’s film, you might even be excused of thinking that Wind remained a flight of fantasy, rather than a complete feature. Orson Welles and his legacy lives on. MT