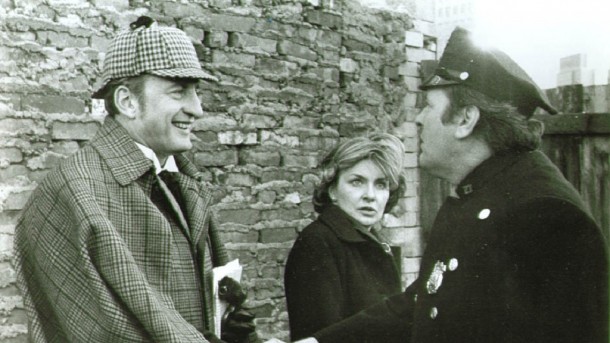 Whilst only directing 13 films – The Lion in Winter being one of them – Anthony Harvey’s name stands for quality. London-born in 1931, he was the editor of classics like Kubrick’s Lolita and Dr. Strangelove, as well as The Spy who came in from the Cold and The L-shaped Room; learning enough from major directors to transfer it into his own work after leaving the editing suite in 1967.

Set in what was then contemporary New York, Justin Playfair (Scott) has withdrawn from life after the death of his wife and fantasizes that he is Sherlock Holmes. His brother is only too keen to have Justin admitted into a psychiatric institution so he can take over the family fortune, worth many millions. At the clinic, psychiatrist Dr. Mildred Watson (Woodward) is surprised that Justin can diagnose a patient correctly; a Mr. Small, who does not want to talk. Justin explains to Dr. Watson, that Small is pretending to be Rudolph Valentino, who once starred in silent movies and never spoke. Dr. Watson releases Justin from the clinic and visits him at home, where he lives in a study which is the exact replica of Holmes’ room in Baker Street. Whilst Dr. Watson is aware of Justin’s mental illness, she still joins forces with him to track down Dr. Moriarty, Holmes nemesis. The new partners track down a man, who blackmails Justin’s brother, making him speed up Justin’s incarceration. And finally, in Central Park, they confront Dr. Moriarty.

Goldman’s script, based on his own play, is clever and witty. There are unforgettable scenes, like Justin opening the violin case and screaming ”Jesus Christ, I absolutely cannot play the goddamn thing”. But the main interest lays in the relationship between the psychiatrist and her patient: both are very lonely, and they reach out to each other in their own way to escape their mental prison. Playfair’s bravado at the end: “I think, God is dead, he laughed himself to death” is brilliant. The director never romanticises mental illness, but shows the small red line between sane and insane. Veteran DoP Victor Kemper excels with lively images in the outdoor locations in New York, at a time when many studios still avoided shooting in the outdoors. THEY MIGHT BE GIANTS (the title alludes to Don Quixote’s fight with the windmills) is a hidden gem, worth a re-discovery. AS