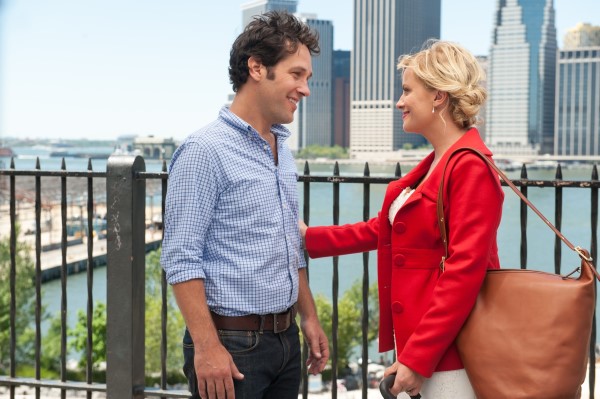 They Came Together is a comedy from the school of ‘have a go humour’. You can imagine the scriptwriters getting together with a loose story of coupledom and just ‘going with the flow’ in a totally spontaneous way. What comes out is a cinematic version of comedy diahorhea. Directed by David Wain and co-written with Michael Showalter, this wild send-up of the romcom is so over the top it sometimes makes you laugh out of desperation and sheer disbelief.

The solid comedy cast includes the latest  in American indie humour: Paul Rudd and Amy Poehler with a side serving of Melanie Lynskey and Jason Mantzoukas who feed them the lines. There are some laugh-out-loud moments and others that are just downright cringeworthy. Some of the gags are so unexpectedly weird, the laughter comes as a gag-reaction, rather that one of sheer pleasure.

The story centres on the relationship between Joel (Rudd) and Molly (Poehler). Over dinner with the other couple they discuss how they met, broke up and got back together, ad nauseam.  Unstructured and rambling, They Came Together eventually descends into a series of jerky comedy vignettes, each one sillier than the last, as the storyline gradually loses control. Performances are strong across the board, but the narrative flow feels uneven and staccato rather than flowing and natural, abandoning any effort to provide a satisfying yarn or to flesh out an emotional arc or a for these  characters by making them believable, interesting or moving.

There’s a great deal to be admired about the autistic bravado and sheer hung-ho attitude of Wain and Showater who are so hell bent on shocking and shaming us we end up not caring at all: and maybe that’s the point. Maybe we’ve reached romantic saturation point in the 21st century, preferring to just snatch moments of pleasure along with the weirdness and pain. So if you’re looking for the ultimate antidote to the ubiquitous romcom – this is surely it! And at a meagre running time of   minutes it certainly won’t MT

ON GENERAL RELEASE FROM 5TH SEPTEMBER 2014 IN SELECTED CINEMAS NATIONWIDE