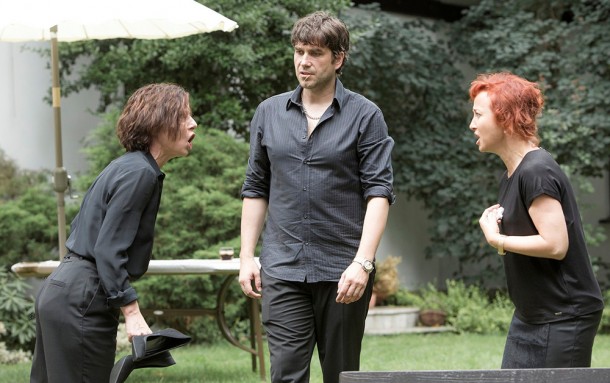 Agata Kulesza (Ida)  is the star turn of this Warsaw set family drama that never feels downbeat despite its tragic subject matter. She plays Marta, the middle-aged daughter of a woman who suffers a stroke, in the opening scenes, and is admitted to hospital with a touch and go chance of survival. At odds with her sister Kasia (Gabriela Muskala) who initially falls apart, she also has to contend with their overbearing father (Marian Dziedziel) who is not a well man himself.

There’s a faint whiff of humour to Kinga Debska’s graciously crafted dirrectorial debut that gravitates towards the more endearing aspects of ageing parents and hospital life. And luckily Marta never takes herself or her family ailments too seriously. And this ironic treatment lightens the more serious issues that arise when the father, recuperating from an emergency brain operation, becomes obstreperous and difficult to handle, escaping from his hospital ward, not far from his comotose wife, to buy alcohol.

Clearly Debska has experience of family bereavement and she brings this insight and subtlety to a film that never trivialises the difficult business of survival and the mental anguish for all concerned as family dynamics shift in surprising and ultimately deeply moving ways. Both the sisters have their unique coping mechanisms, Marta, the most outwardly robust and irreverent (not dissimilar to her character in Ida), debates with the doctors and smokes dope when the going gets tough. Kasia is more flighty and sensitive – passive aggressive even – praying in church and calling her mother soppy names, much to Marta’s disdain.

Andrzej Wojciechowski’s cinematography makes this family portrait all the more enjoyable with its softly bleached aesthetic and occasional widescreen visuals of the capital and surrounding countryside that take a welcome break from the hospital routine in an impressive drama that clearly marks Debska as a talent in the making. MT