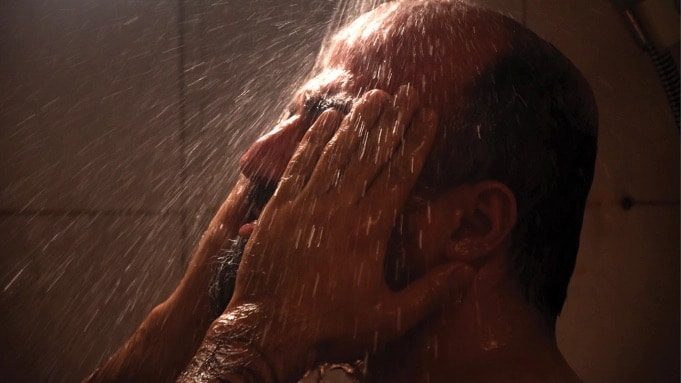 Iranian director Mohammad Rasoulof (Manuscripts Don’t Burn) is under house arrest in his own country waiting for a prison sentence to be enforced. And to make matters worse, is forbidden to direct feature films.

Nevertheless, Rasoulof managed to escape all restrictions and shot There Is No Evil secretly, and had the copies smuggled out of the country where his film won the Golden Bear at the Berlin International Festival in 2020. Anyone expecting a hurried guerrilla style film will be surprised: DoP Ashkan Ashkani’s measured wide screen images are intricately composed, and the tempo is either lyrical or unhurried in the four episodes which deal with the death penalty, part of the instrument of terror in Iran’s repressive regime.

The first episode (that takes the main title) shows an ordinary day in the life of an ordinary couple. We watch Heshmat (Mirrhosseini) leave his work place, fetch his wife Razieh (Shourian) from work, collect their spoilt daughter from school, visit the ailing grandmother, prepare for a wedding the next day, pay bills at the bank – with Heshmat having time to rescue a little cat trapped in the garage of his apartment block. It therefore comes as a surprise that Heshmat’s work is to carry out some of the many executions demanded by the Iran’s clerical fanatics aimed at punishing all forms of resistance. Needless to say, Heshmat’s ‘work’ room is as unremarkable as his life outside.

Episode two “She said, you can do it” is a thriller. Private Ponya (Ahangar) is in a room with five other soldiers. As dawn breaks Ponya will undertake his first hanging of the day, by kicking away the stool from the standing victim. Ponya does not want to blacken his soul, but there’s no other way of doing his job. His pleasant girl friend collects him in a car, and Ponya is overwhelmed by his own ‘courage’: triumphant music celebrates his escape from the deadly duty.

“Birthday”, the third segment, returns to the topic of hanging, this time again featuring a soldier whose duty is to kick the stool from under the execution victim: Javad (Valizadegan) agrees to perform the gruelling task in order to get three days off to propose to his girlfriend Nana (Servati). He arrives in the countryside, and washes himself in a stream. Chairs are set out in the garden of the country mansion where Nana is waiting for him, but the chairs are not for her birthday celebrations, as her father tells Javad, but for a memorial service for Keshurvaz, a local teacher and opponent of the Regime, who had been executed the day before. Javad is crushed, and later confesses to Nana. She is gentle but firm: saying good-bye to Javad for the last time.

The last episode, by far the longest, enigmatically called “Kiss Me”, features Baran Rosoulof (the director’s daughter) who plays Darya, a young medical student, living in the USA, and home to visit her uncle Mehr (Sedighi) and his wife Zaman (Shahi), who live in the remote Iranian countryside. Mehr suffers from TB, and is not practicing medicine any more, instead the couple lives from the proceeds of their bee-keeping. Darya is in permanent contact via mobile with her father Mansoor and her boy friend, but neither seems to be able to satisfy her many questions. Finally, Mehr admits the shocking truth about her origins which came about due to a lack of trust and disillusion with the brutal regime in another tragic family story.

Rasoulof avoids sentimentality directing with crisp emotionless precision and never dwelling on the overwhelming negativity. A near fatalistic air hangs above all four segments. “Kiss Me’, teeters on the brink of an emotional outburst but Rasoulof in the end opts for restraint, dwelling on a long shot in the beautiful mountain landscape. The feature was originally called by its direct translation “Satan doesn’t exist”, a more fitting title for this understated masterpiece. AS

ON RELEASE NATIONWIDE FROM 3 DECEMBER 2021