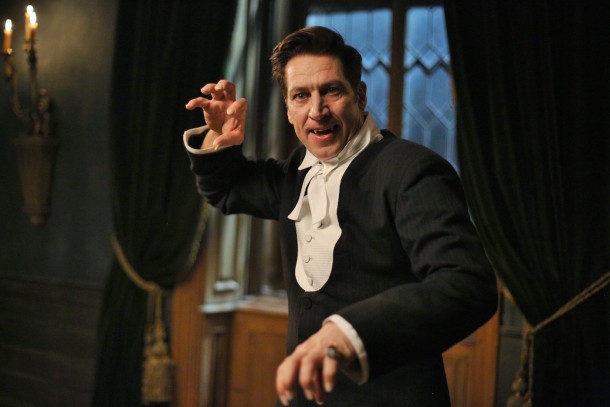 Austrian auteur David Ruhm adds a stylish and witty contribution to the blood-bloated canon of the Vampire genre here with a Freudian-themed thirties pastiche THERAPY FOR A VAMPIRE.

In his Viennese consulting rooms in 1911, Dr Sigmund Freud (Karl Fischer) is conducting an early experiment using Art Therapy to explore his patients’ dreams. Naturally, given the title, one of his most illustrious patients is experiencing some challenging ‘issues’. Count Geza von Közsnöm (Tobias Moretti) is suffering from a generalised ennui: having lived for thousands of years, he’s simply tired of life and the sex with his wife, the strikingly sultry Gräffin Elsa (Jeanette Hain) has simply lost its bite. He is also haunted by the premature death, centuries earlier, of his true love, Nabila.  When he sees a portrait of a woman painted by Viktor (Dominic Oley), Freud’s inhouse artist, he is struck by a mysterious ‘deja-vu’ between the subject of the painting, Lucy (Viktor’s girlfriend played by Cornelia Ivancan), and his own long lost lover.

Back in their bijoux castle in the wooded suburbs of Vienna, Count Geza enthuses over Viktor’s artistic skills to the emotionally needy and narcissistic Graffin Elsa, who is having serious problems with her image. Unable to see herself in a mirror, she implores Count to commission Viktor to paint her portrait.

Rühm has crafted two very appealing vampires here, who are not only stylish and drôle but also have lost none of their dark weirdness, in echoes of Tilda Swinton and Tom Hiddleston in Only Lovers Left Alive, although this is a far more stylised drama. Drinking blood from transfusions they are able to define the exact profile of their victims – young Virgin, aged Diabetic – and so on – without the inconvenience and mess of blood spurts and uncontrollable haemorrhaging on their beautifully hand-tailored attire. They are endowed with all the traditional Vampire capabilities of bestial transformation, they quail away from crosses, garlic and wooden stakes but they also embody the more playful attributes of irony and self-parody as seen in The Munsters. But it is their obsession with counting objects that is their final downfall.

Beautifully-crafted and sumptuously staged, the success of Rühm’s Gothic horror piece lies in this combination of sinister weirdness and seriously dark humour, and there are some unexpected quirky laugh out loud moments that make this really entertaining. And although it never fully explores the Freudian premise, it pays homage to the legendary therapist in its themes of unrequited love, vanity and sexual obsession. Performances are consistently good: the two female leads are far from pliant, adding a foxy feminist streak to their Gothic horror credentials. Viktor is sensitive and appealing and Count Geza sneeringly wicked and elegantly masculine.  MT