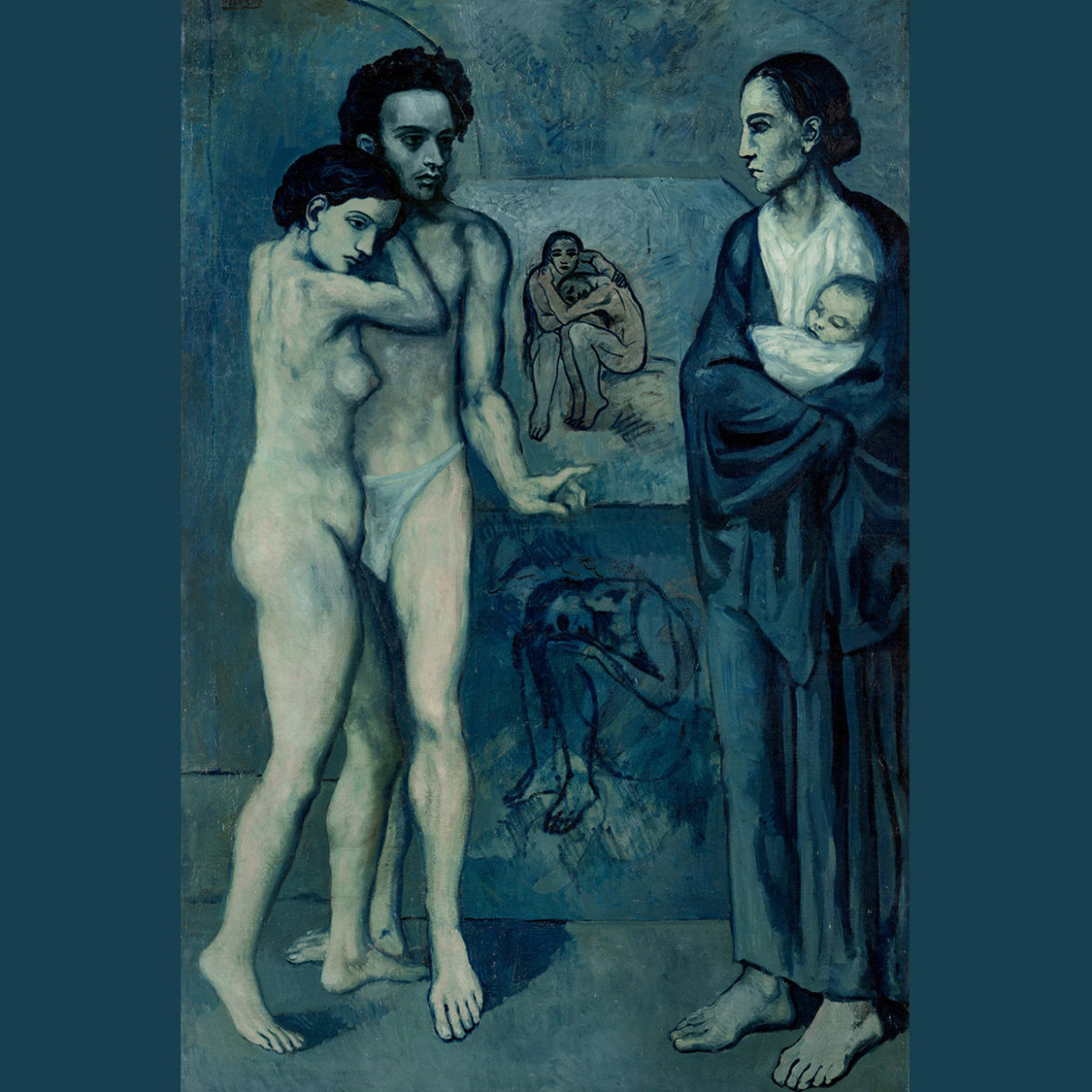 In the autumn of 1907 a young Spanish artist showed his Parisian friends a new painting. So horrified were they that he rolled it up and didn’t show it again until 1937. The artist was Pablo Picasso.

Picasso’s formative years are the focus of Phil Grabsky’s latest artist profile for Exhibition on Screen. Enlived by paintings and interviews with museum curators and experts, The Young Picasso has the benefit of the painter’s grandson Olivier Widmaier Picasso as a talking head, giving his impressions of the legend. The straightforward linear approach chronicles Picasso’s formative years from childhood to adulthood in a well-paced, absorbing and informative biopic that shows how the painter’s focus was the future, and his raison d’être was to be highly original.

Pablo Ruiz Picasso was born into a close family in the Andalucian city of Malaga in 1881, but he would live in Barcelona, La Coruna and Paris during his lifetime, and those places very much informed his work. Somehow he never forgot the intense light of Southern Spain. In the final part of the 19th century Malaga was a city divided between the upper bourgeoisie and the working classes, a place where industry was falling behind its counterparts in the rest of Spain. But it was also an intensely artistic place and Picasso absorbed all those local influences along with the city’s rich and unique combination of Christian, Arabic and Jewish culture. His father Don Jose taught painting and was his son’s guiding light.  Picasso sketched from an early age and produced his first work ‘Twilight in the Port of Malaga”, aged 7.  Just before his tenth birthday, the family moved to La Coruna on the Atlantic Coast and this is where he began painting with oils. Although the family were to live in the Northern city for only 3 years, the stay was a major influence on his career, and here he would give up his main studies to focus on art, and particularly portraiture. His father soon abandoned his own interest in painting and gave Pablo all his brushes, and the boy began to sell his work from a small shop in the city centre, Calle Mayor.

But the heart of the art scene was really Barcelona. And so in his teenage years Picasso gravitated towards the Catalan capital where his talents broadened with contemplative works like “An Evening At Home” and a self portrait created in 1896. Although his canvasses “Science and Charity” (1897) and ‘The First Communion’ (1896) showed Picasso’s ability to paint in a formal traditional style, he soon started to develop a more eclectic and inventive bias once in Barcelona. This was a reflection not only of his own nature but also of the more exotic and even seamy side of life that the Catalan capital represented. He continued to perfect his technique for painting limbs and physical characteristics, and despite his small stature he was able to paint some quite large canvasses. Soon his family sent him to San Fernando Academy of Fine Arts in Madrid where he discovered the Prado with classic artists such as Valasquez and Goya. But he soon found his way back to Barcelona. There politics soon entered the arena as he mixed with a lively community of young artists, and in February 1900 he made a breakthrough sharing an exhibition with the painters Ramon Casas and Rusinol. And it was his association with these artists that took him to Paris. His essentially realist style was in flux with works such as “Lola, the artist’s Sister” in the studio in 1900 when he was only 18. In the Autumn of that year one of his paintings was accepted for a Paris exhibition and he fetched up there at an artistically transformative time, with Montmartre already a Spanish artist colony in the capital. This was the first time Picasso really struggled in life, but he was ready to show his metal and finally to give his creativity and curiosity full rein. He dropped his father’s name Ruiz, and took his mother’s. Yo Picasso was born. A natty dresser he always wore matching underwear and socks and often a top hat. This was an exciting time to be in the city and the local galleries were full of Toulouse Lautrec and other new artists, and local society was richly dressed and passionate. “La Moulin de la Galette” (1900) and “The Dwarf”  (1901) both echoed the dream-like works of Klimt and Lautrec with dazzling tones of turquoise, red and green. Work became less focused on Spanish subjects and more on the local bourgeoisie at play. Impressionism entered the fray in the Vollard Gallery where many of his works were painted on cardboard. Money was tight as a 19 year old, and he lived an intense experience to make his way forward, sharing a small studio with his colleague Carles Casagemas (Germaine, at Night c1901). But they fell out over a woman called Germaine. Casagemas tried to shoot her dead in a bar but he ended up just killing himself, a tragedy which fuelled Picasso’s blue period hghlighted by works such as “Two Women in a Bar” (1902) and “Mother and Child” (1902), The symbolic work “The Tragedy/La Vie” serves as an allegory for both life and love. It was painted in Barcelona but very much looks back to his time in Paris with Casagemas . This was one of his first artistic periods that saw him search for an identity, symbolically dealing with themes such as death and poverty. He re-interprets his sources in a very personal way. During the blue period, Picasso dealt with serious themes but also small works that contained erotic subjects in local bars.

Picasso was an arch misogynist and has his first serious relationship was with Fernande Olivier when he moved in Spring 1904 to his new studio in Bateau Lavoir. He was – according to her – sweet, intelligent but also extremely jealous. He also had an ambivalence that made him charismatic. He would work late into the evening and night but resented his reliance on other people for money. His pink period (not much ‘pink’ but more referencing his love of the Circus) lasted roughly from 1904-06 and was epitomised in “Acrobat and the Harlequin” (1905) but he soon started to feel more positive about making money with works such as “Boy Leading a Horse”. He portrayed himself as the Harlequin and began a friendship with the French poet Apollinaire. In Spring 1906 he went to Spain to the remote Catalan village of Gosol with Fernande where he painted “The Harem” in 1906. This kicked off his geometric style and “Nude with a Pitcher” followed . At this point his work moves away from a representational approach and focuses on the subject itself. It was also during this time that he started work on the “Demoiselles d’Avignon” (1907). Picasso claims “painting is not an aesthetic process, it’s a form of magic that interposes itself between us and the universe”. His present was a result of the past. This period he called called Primitivism. He wanted to create a new type of art. Fernande Olivier comments:”Picasso presented us with a way of the world which did not conform to what we had grown to expect of it” His faces became masks – aggressively stylised and ambitious – like nothing ever seen before. His next painting was a brothel scene involving 5 women and 2 men. The spectator becomes the voyeur but also involved in the scene. The figures are actually starring back and engaging with the viewer in an alarming and unprecedented way. Paradoxically, they are neither Misses but nor in Avignon. The title refers to a street in Barcelona where Picasso visited a brothel. The name is likely to have been given by a dealer later on in a bid to put a positive spin on the picture. “Les Demoiselles” was revolutionary, incorporating primitive non-Western elements in a traditional form of classic Venus. It represents a turning point in modern art and ushers in Cubism. But his friends hated it. In 1916 – a decade later – the painting was considered a success. Picasso had finally arrived at his objective. He was 35. MT