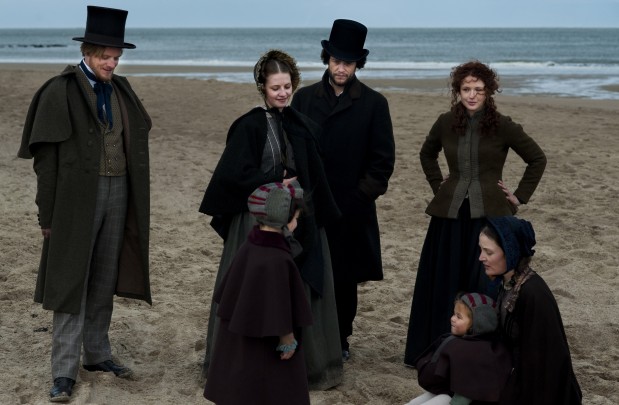 Interesting to discover that, according to Raoul Peck (I am Not Your Negro), the young and unemployed Karl Marx lived on the money of a capitalist he despised, while writing his community treaty Das Capital, and fathering two children. This is one of many revealing facts uncovered in this worthy period drama – which is rather pleased with itself despite being about as enjoyable as a wet weekend with Diane Abbott and one of her migraines.

Played convincingly by August Diehl (Salt), the 26 year old lived with his heiress wife Jenny in exile in Paris, where he is pictured as a rather arrogant flaneur habitually in debt and plagued by existential anxieties. Initially dismissing German factory heir Friedrich Engels (Stefan Konarske) as a dandy, the pair go on to develop a veritable bromance when Marx discovers Engels has just published a study on the miserable impoverishment of the English proletariat, and has distanced himself from his father – despite remaining on the payroll, hence financing Marx.

From then on this becomes a political procedural as the pair, assisted by Jenny and Engel’s factory shop steward wife Mary Burns (Hannah Steele), continue to work tirelessly and admirably to provide a theoretical foundation for revolution and to improve workers’ rights and abolish child labour. Soon their aim is not merely to interpret the world, but to change it with a work entitled Critic of the Critical Critique and subsequently, the Communist Manifesto.

Pascal Bonitzer’s brisk workmanlike script follows a linear narrative; Alexei Aigui (I am Not Your Negro) and animates it with an earnestly dramatic score, with unimaginative visuals conveying the drabness of Victorian England to great effect in a rather lacklustre but informative period drama. MT