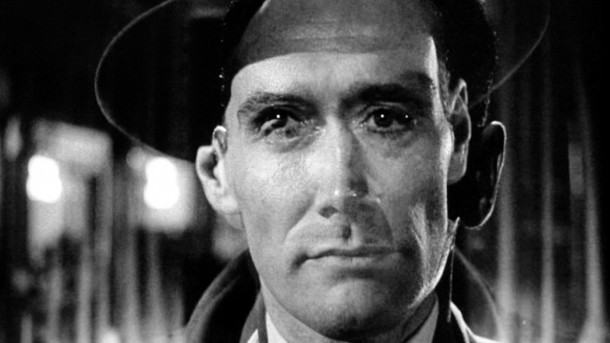 Reviewing Truffaut’s monumental book-length interview with Alfred Hitchcock in ‘Punch’ in 1968, the late Richard Mallett made the interesting observation that “three-quarters of the way through the book [Truffaut] begins to show a tendency to argue and Hitchcock to contradict”. Nowhere is this more apparent than in the section devoted to The Wrong Man, when Hitchcock is eventually provoked by Truffaut into the rejoinder that “It seems to me that you want me to work for the art houses”.

Despite the extraordinary reputation that Hitchcock’s next film Vertigo today enjoys, relatively few people have even heard of – let alone seen – the far superior The Wrong Man. Superficially it couldn’t be less like what we expect from a ‘Hitchcock’ film (he himself said “it wasn’t my kind of picture”), and its indifferent box office performance led Hitchcock just to shrug his shoulders and “file The Wrong Man among the indifferent Hitchcocks”. Yet it is easily the most frightening film he ever made, and the most single-minded expression of one of his most personal and perennial themes: fear of the police and of arrest.

Countless films end with a character being led away by the cops; but it was a typically bold Hitchcockian reversal that in this film the arrest is simply the starting point. Plenty of films have been compared to nightmares, but of all Hitchcock’s films that description most truly belongs to this one. Sitting through this relentless Kafkaesque ordeal is almost as unbearable to watch as it must have been to experience; and is exactly like one of those awful dreams from which you wake up in a state of panic thinking “Oh, thank God! It was just a dream!”.

Ironically it took the most realistic film he ever made to create the Hitchcock film most like a nightmare. What happened to Christopher Emmanuel Balestrero (1909-1998) actually happened in 1951, and became the subject of an article called ‘A Case of Identity’ by Herbert Brean in Life magazine on 29 June 1953. To create what John Russell Taylor described as “the hallucinatory clarity of a bad dream”, Hitchcock minutely and unsparingly recreates the original events on the actual locations. We see events entirely from Balestrero’s viewpoint as he is spirited away by two strange men at his doorstep, submitted to the humiliation of being stared at during reconstructions of the hold-ups of which he is accused and in identity parades; then bundled into a prison van to be fingerprinted and spend the night in the cells. As he gazes out of the police car he watches other people leading normal lives as he himself had been only hours earlier; but which in an instant now seem like another world.

Although Hitchcock himself later said “I don’t feel that strongly about it”, this certainly isn’t the impression one gains from the film itself. Hitchcock was tiring of being considered merely a purveyor of “glossy Technicolor baubles”, and The Wrong Man was the first of two attempts to make something more astringent in black & white (Psycho being the second). Hitchcock made it for no salary and, minus his usual cameo appearance, appears before the opening credits to introduce the film. As the handsome new Blu-ray edition reveals, he has taken far more effort with the look of this film than he usually did. There is none of the sloppy back projection of exterior sequences that mar so many of his other films since Hitchcock disliked going out on location when he could possibly avoid it; and when his crew arrived to shoot the scenes at the country hotel, swiftly retreated to his limo to escape the cold. Fresh from winning an Academy Award for photographing the French Riviera in VistaVision and Technicolor for To Catch a Thief, Hitchcock’s versatile regular cameraman Robert Burks effortlessly switches to Jackson Heights and the other end of the visual scale; complemented by Bernard Herrmann’s melancholy, low-key jazz score.

The most chilling words in the English language are probably “If you’ve done nothing wrong you have nothing to fear.” And when Balestrero’s wife Rose (a sensational performance by Vera Miles in an already extremely well-acted film) finally completely loses it and proposes that the answer to their desperate situation is to barricade the front door the sheer hopelessness of their situation finally hits you like a thunderclap; for the exquisite irony of the film is that it is the very people whose job it is to protect honest, hard-working citizens like the Balestreros who are doing this to them. Resistance is futile.

As with Kafka there are flashes of very black humour, as in the attempt by the police to put Balestrero at his ease by initially calling him ‘Chris’ (his family and friends actually call him ‘Manny’); and they seem genuinely concerned on his behalf when they say “This looks very bad for you, Manny” when a particularly damning piece of handwriting evidence emerges. (The fact that Manny’s ordeal ends only after he resorts to prayer could be seen as a cynical comment on the fact that man-made justice had so far entirely failed him). The classic Hitchcock device of showing you one thing while people are discussing something completely different is well employed in the scene in which their lawyer (Anthony Quayle) discusses the case while we clearly see his concern at Rose’s deteriorating mental state. Nor does the concluding onscreen caption telling us that Rose made a full recovery square with what we’ve just see with our own eyes in her final scene in the sanatorium; Hitchcock had obviously forgotten that this was how the film had ended when six years later he said to Truffaut that “She’s probably still there”.

This was Henry Fonda’s only movie with Hitchcock. Coincidentally his next film also took a detailed look at the American judicial process, but instead took place in the jury room. 12 Angry Men wasn’t a hit at the time either; but posterity has made better amends to it than it has to The Wrong Man. Richard Chatten.

NOW OUT ON BLURAY FOR THE FIRST TIME at Amazon.co.uk