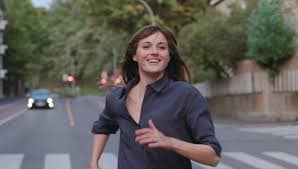 Renate Reinsve won the Best Actress award at Cannes for being ‘the worst person in the world’ in Joachim Trier’s latest film. But her only crime is indecision in this morally complex character drama about freedom of choice for beautiful young things in the 21st century.

Julie is 30. A perfect age to be alive in Oslo where she lives with her boyfriend Aksel (Anders Danielsen Lie, who also stars in Bergman’s Island), a successful cartoonist who adds a thoughtful stability to Julie’s spirited self-focus. The choppily edited early scenes see Julie reinventing herself in various career choices: medicine then psychoanalysis, then photography. Her mother is supportive then exasperated in an upbeat narrative that regularly spins off in various directions but never loses its central focus in a script co-written by Eskil Vogt.

Aksel’s career is going from strength to strength and he wants to start a family. But Julie is conflicted and even more so after the two spend a fraught weekend with his family where other smug couples make her feel uncomfortable with her lack of decision. What follows is series of episodes where Julie toys with her career choices and the men in her life, Aksel becoming more and more disenchanted with her constant forays into pastures new.

Divided into twelve chapters, a prologue and epilogue, the film fizzes with light-hearted fun never making Julie out to be callous – she is sensitive and likeable – but feels a genuine uncertainty about her emotional status in a society that seems to funnel us into a lemming like direction of commitment. There is melancholy too, especially in the final chapter where Julie is made aware of the impact of her choices, or lack of them. Sometimes splashy but always entertaining this is a watchable chronicle of modern millennial life. MT