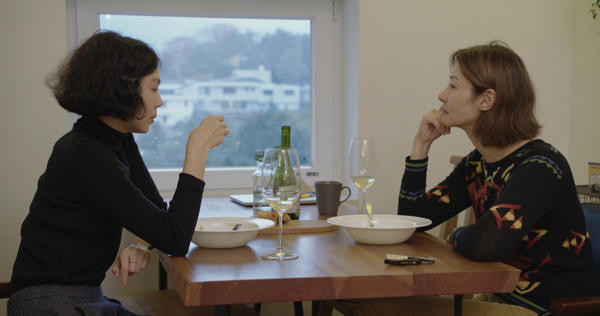 Hong Sang-soo comes to Berlinale for the third time with another disposable drama concealing sharp observations about the nature of love and attraction. Once again his muse Kim Min-hee is the focus of this female centric story. She plays Gam-hee who meets up with three friends and runs into an old acquaintance, while her husband is abroad. Nothing really happens but the tentative conversations have a quirky humour unique to this veteran South Korean filmmaker, as gradually the layers of Gam-hee’s quiet neuroticism are peeled away.

The Woman Who Ran is not as funny as his best drama In Another Country (2012) that had Isabelle Huppert in a lost in translation merry-go-round in a beachside resort. Many find these films have a banal quality but others see hidden depths in the seemingly slight encounters.

Each new meeting involves Gam-hee divulging her thoughts about her marriage. How her husband thinks they should spend every day together, although this is the first time in their five year marriage they have been apart: “He says that people in love should always stick together,” Eventually we get the impression she is hinting at some hidden concerns about her love life although nothing is divulged along those lines.

The various encounters always feel slightly awkward and gauche, the parties retreating to safe ground at the first sign of potential conflict, and this is particularly the case with the first visit. Gam-hee is invited to supper at the house of recent divorcee Young-soon (Seo Younghwa) and her roommate Youngji (Lee Eunmi). The three women discuss the topic of eating meat, and discuss Youngji’s grilling skills before finally exploring the possibility of going vegetarian. There is a difficult doorstep discussion with their neighbour who comes round to address the issue of their feeding his cat. They all pussy foot around the subject before elegantly stepping away from any slight contretemps, the neighbour backing off having achieved nothing, but making it clear he not best pleased.

Gamhee then goes round to visit her slightly older friend Suyoung (Song Seonmi) who talks about a potential new boyfriend in the flat above. Later she confesses her fear of him finding out about her one night stand with another neighbour, who is now pestering her for more. But it is the final meeting that leaves us in the dark as to the film’s title. Woojin (Kim Saebyuk) says she has something important to tell Gam-hee but she never reveals what it is. The film’s enigmatic approach feels rather unsatisfactory, appearing to have been given a random title. The Woman Who Ran is mildly engaging while it lasts but ultimately forgettable once we have left the cinema. MT